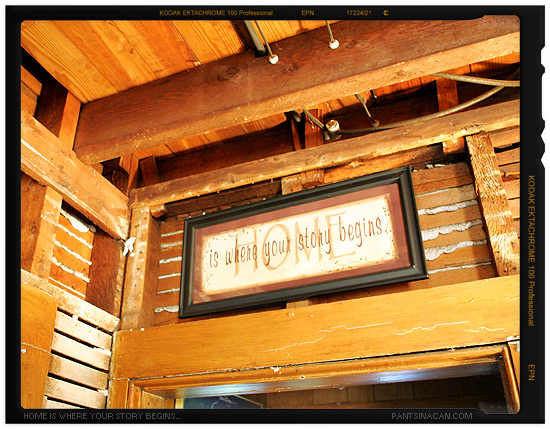 We’re dragging our feet on this because of the entry room of our house. It’ll kill an appraisal on it’s own.

The picture above is actually a glimpse of the room I’m referring to in all of its glory — not something stolen from some random person’s flickr gallery. That’s my actual house. It’s bad. Seriously.

Now for most people, the appraisal is little more than a formality but for us, well, we could have a diamond encrusted bathtub in the bathroom and it wouldn’t matter… The entry room is a deal breaker.

Let’s do this right.

On Wednesday night we had an extreme makeover type of contractor come over. We told him that this entry room was the primary focus right now but that we’d actually like to have the entire first floor renovated but due to budget concerns, for now, everything on the first floor except for the kitchen.

I’m not saying that the kitchen doesn’t need to be renovated — it certainly does — but, for now, well, we can live with it.

Though we only wanted 3 rooms renovated and a new staircase (maybe 650 square feet total) he went through our entire house from top to bottom. Yep, he went up to the attic. Scoped out the entire upstairs, the rooms we actually want gutted, and the basement too.

He was basically picturing it all in his head — you could see it in his eyes — and looking for potential stumbling blocks. Oddly enough, I think it worked in our favor that we’d already destroyed one room so that he could see exactly what he’d be working with behind all of the plaster

He flat out said, “You should start by replacing all of the wiring…”

It’s not that I didn’t know that — it’s just that I’ve never been sure what order to do things in.

I mean, do you replace a floor before or after you put up drywall?

It was only after the fact that we learned that you should replace siding before a roof — I don’t want to make that mistake again and I wish one of the contractors we’d had over back then would have mentioned it.

On that note, I also don’t ever want to deal with terrible contractors ever again…

This guy, who didn’t seem like a seedy scumbag for even a second, didn’t seem phased or unsure about anything our 125+ year old house threw at him.

If anything, I think he was shocked at the quality and condition of the workmanship within which, yeah, made me feel pretty good about my currently crappy house.

When he asked what our budget was for the three rooms I lowballed a $15-$20k number (which we’ve already saved up).

He mulled it over — likely scaling back what he’d imagined in his head considerably — and finally said it’d probably cost a bit more than that but we’d be shoring up some support columns in the basement and re-wiring the entire house as well… two things that I’d wanted done anyway but wasn’t sure how to work it in to the equation.

Well, let me get back to you on that…but still, pretty likely something we’ll move forward with…

So now the plan for the appraisal depends on what this specific contractor comes back with.

If it’s a number that works for us, we’re going to get one of the PODs delivered ASAP and we’re going to completely empty the entire first floor of our house in anticipation of the demolition phase for the remodel and then schedule the appraisal.

With a completely bare (and possibly even already gutted) first floor, my hope is that it will appear to the appraiser that we’re in the midst of an extreme renovation and that’s why our home looks incomplete.

Sure, it could backfire but the way things are now, it’d backfire anyway.

A re-fi isn’t a “this must happen” thing for us. We’re doing alright as it is — I just wanted to finally skirt PMI and lower my payment at the same time.

Basically, if it doesn’t go through, we’re out around $400 for the appraisal and life goes on. We’ll be fine and I’ll still plan on paying off the mortgage before Duncan is even out of elementary school and before I turn 40.

The best news, though, is that we’re *finally* moving on this renovation.