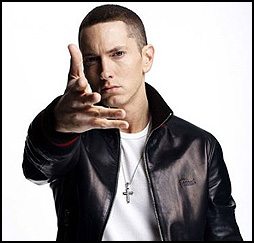 I’m going to ignore the Brisk Iced Tea commercial for the time being but what was Chrysler thinking?

I got the message of the commercial — yeah, yeah, Detroit is making a comeback and Chrysler is trying to market themselves as edgier or something by using a local celebrity in a wicked long commercial.

On paper, or in a brainstorming marketing meeting, that sounds like a pretty good commericial, I’ll admit.

But then you choose Eminem to star?

What, was the scummy Kid Rock unavailable?

To the masses, Eminem is the guy who can’t get a full sentence out without using profanity, beat his girlfriend/wife, and on top of that, he hates his mom too.

Would you want someone like that as your spokesman for a 12-million dollar plus spot during the Super Bowl?

The vast majority is who Chrysler should be marketing towards…but they chose not to.

Seriously, though, most of the cars are made across the river in Canada anyway. “Imported” from Detroit is right…

Justin Bieber might have been a more appropriate spokesman… and, last time I checked, he still lives with his mom.

Spending Report for May 2011