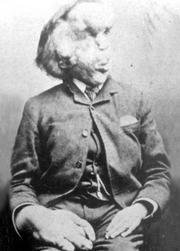 So, again, since it’s been so long since I’ve updated things around here, I should probably mention that there are no longer two kids in the family… now there are three!

Moments after he was born, I called my mom with the news…

“Mom and baby are doing fine except that he has 11 toes. Well, actually, he only has nine. Um, it’s complicated.”

I kinda wished I could’ve broken that news to my dad — he’d have found it both fascinating and hilarious.

So, an extra “digit” or polydactyly, as the doctors like to refer to it as, is pretty obviously a birth defect — something the doctors in the delivery room nonchalantly pointed out as if it were no big deal.

But hearing “birth defect” merely seconds after birth totally gets your head spinning with thoughts that, the baby might have a second head, a tail, or even gills behind their ears or something.

I didn’t even get to the point where I was imagining John Merrick — who was actually named “Joe” Merrick.

And while news may get out that I nearly fainted in the delivery room this time, it was NOT this unexpected turn of events that made me queasy. It was the claustrophobic get-up they made me wear… No, seriously, it’s not easy to breath with a plastic bag strapped to your face…

So, anyway, my little guy has an extra toe (with a toe nail, even!) on his left foot.

His pointer and middle toes on both feet are fused together. The doctors called this “webbed feet”.

Having never actually seen webbed feet on a human, I was more expecting them to look like a duck’s feet. It’s not nearly as cool as that would have been and, honestly, I’m not sure it’ll make him a better swimmer a few years down the road. Maybe.

So, to sum it all up, he has 11 toes total but two pairs are fused together.

In my head, I kinda called BS on that.

I mean, I’d heard of webbed feet and was aware of the 6-fingered man from the Princess Bride movie that Inigo Montoya wanted to face so badly but…I’d never actually SEEN someone with webbed feet or and extra toe or finger.

Then I got to thinking, what was I going to tell the kids?

“Hi guys, your new brother is a mutant.”

In reality, the nurses did what they could to put us at ease claiming that it wasn’t a “big deal” but it still kinda simmered in the depths of my mind — is this going to be a problem?

I mean, they don’t call it a “defect” for nothing, right?

And then came the news that I kinda knew was coming…

Yep, they wanted to do some genetic testing to see if it was a “sign” of something far more damning than never being able to model strappy sandals.

You know, they always call it a high risk pregnancy if the mother is over 35. And by high risk, they mean like you have a one in 600k chance of having an issue. I don’t know about you, but 1 in 600k doesn’t sound too high risk to me.

I felt that way with all of my kids — which is why, besides the first one when we were naive and stupid, we didn’t have any of the invasive pre-natal testing done. Amniocentesis is the common one as well as the CVS test.

And while I’m certainly not a fan of rolling the dice and hoping for the best while ignoring modern science and medicine, the results of the amnio on my first child provided less than assuring results and far, far too late to do anything about it should it actually have reported something concrete.

Fortunately, or unfortunately, I didn’t feel the testing really ruled anything out — or in. The whole thing seemed nearly pointless and, actually, I think it caused us even more needless concern.

Just what a pregnant woman needs, right? More to worry about.

(For the record, an amnio wouldn’t have helped us in this case…)

Primarily, they were testing for Smith-Lemli-Opitz Syndrome, which is often abbreviated as SLOS and makes me think my baby is going to turn into Sloth from the Goonies.

Yes, everything in my life has a corresponding reference originating from an 80’s movie.

One of the other “physical traits” of the disorder — besides messed up feet or hands — is a small head. Ever seen the waiting room scene in Beetlejuice?

Holy crap. I need to sit down.

My baby is going to turn into a evil swashbuckling tiny headed sloth creature that swims like Michael Phelps and loves Rocky Road ice cream.

So, we had the testing done (just a blood test) and are still awaiting the results. I’ll update on that when the results come in.

He’s also visited a cosmetic surgeon (with all kinds of boob job pamphlets in the waiting room) to attempt to spare his future career as a flip-flop spokesman and model.

The truth of it is, I’m not that worried about the results of the test.

He doesn’t have a small head. He has no problem eating. He makes the same noises my other kids used to make. He squirms around the same way. He cries the amount. He makes eye contact and smiles.

Really, to me, he appears to be a standard baby. 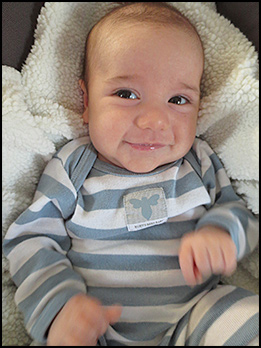 And as offensive as some overly sensitive folks might think saying this sort of thing is, well, he doesn’t look “off”, if you know what I mean. There’s life behind those eyes and, for me, that’s the best indicator out there.

It might not be an exact science, but you really can read a person by their eyes even when they’re so dirt brown like mine that the pubils almost disappear…

So the boob doctor will be removing the 11th (or 9th, depending on how you count) toe on May 15. Emmet, the baby’s name, will be just over 4 months old.

We’ve opted to NOT have the connected toes split apart since that’s like a million percent cosmetic. Still covered by insurance but certainly not necessary.

And, before you ask if we could just leave the extra toe in place too, unfortunately, it’s not lined up quite right to be an extra pinky toe (other wise, I’d consider it) so finding shoes for him would be downright impossible.

For that reason, it’s gotta go.

I drove my BMW to work on Friday