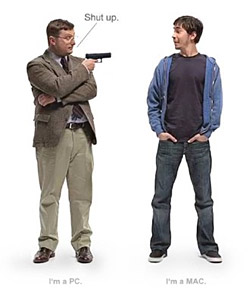 Leave it to the folks at Apple. Great marketing, I’ll give them that, but as far as I’m concerned, they’re now nothing more than a walkman manufacturer. (Will the whole iPod fad die please?)

The computing side of the company was never great to begin with, but ever since their “rebirth” with the iMac (ooooooh, pretty colors!), they’ve been that annoying mosquito buzzing around your ear.

You just can’t get them to go away….

The most recent campaign, though a few years old now, is still pretty entertaining, even viewing them from the “PC” side of the aisle.

Effective with the masses too, I’m sure.

I could refute every claim and inference made in each individual commercial to date, but I’ll spare you. To the veteran computer user, it’s all obvious propaganda.

The funniest part of the campaign to me are all of the references to how square the “PC” fellow is, compared to the hip “Mac” guy.

Now I don’t know about you, but about 10 minutes after graduating from high school, I stopped caring about being hip or cool.

Now it was time to be successful. 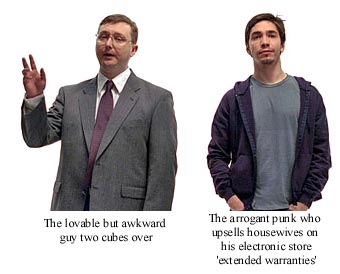 No offense to the “Mac” character, I’m sure he’s a nice guy, but I don’t really want to be like the guy who always wears a hoodie over a ratty t-shirt and never combs his hair. Or the one who brags about how cool his “video-mails” are.

I don’t know about your neck of the woods, but around here the guys with video cameras hooked up to their computers are generally perverts. Not exactly something I want to emulate.

And the shots at PC’s for crashing, or having viruses, or being difficult to upgrade are really low blows:

Sure, Macs don’t crash — but that’s because they’re toys.

You can’t push a Mac to the brink because there isn’t any software available to ‘push’ them.

They openly admit that they don’t do “spreadsheets” or “calculations” in the commercials in favor of making silly graphics or whatever.

Okay, um, what did we buy this computer for again?

Oh yeah, watching DVDs… Wait a minute, isn’t that what the TV is for?

The virus topic is another slightly skewed shot at the PC fellow.

The “purpose”, while disturbing, of a virus to to infect as many as possible, so why on earth would some loser computer-whiz kid write some malicious code to infect a tiny group of computers?

Why would they do that?

Hey look, my personal virus wasn’t even a blip on the map. It’s about bragging rights, and a virus for a Mac can’t offer that.

Hey, at least it’s possible. Don’t see too many ‘Grape’ iMacs in service these days… (You can find them in the “bulky-trash” dumpsters at your local dump though).

They never once mentioned back then that once the monitor blew out, you had to trash the whole computer…

True, upgrading a Mac is easy as can be — just buy a whole new Mac!

Being a PC user, I’m still using my trusty HP keyboard from 1995 and a Dell monitor from 1997. My hard drive from my first 386 still works today in my current set-up.

Can Mac say that? I think not.

When I do upgrade my CPU every couple of years, and that’s all I need to upgrade, it’s never more that $400.

My graphics cards, sound cards, monitors, etc… just make the trip with me.

And the old CPU’s just end up as servers — I still have a Pentium-60 in service. That’s nearly 13 years old.

Let PC and his cousin who runs Unix take care of the big stuff.

Seriously, don’t even consider a Mac.

Computers aren’t that confusing or difficult anymore; owning a mac just labels you as retarded.

And yes, there is something wrong with that.