No, not a Robert Frost reflection today…

Something that’s been making it’s way around the PF Blogosphere since October is the list of “the 5 most expensive addictions“.

They are listed as:

Alcohol. Estimated annual cost: $166 billion. Binge drinking hits the unemployed harder on a per capita basis — 10.4%, vs. 8.4% of employed people. It is most prevalent in small metropolitan locales, rather than big cities or rural areas. The $18 billion spent on alcohol and drug treatment last year represented 1.3% of all health care spending.

Smoking. Estimated annual cost: $157 billion. The tab includes $75 billion in direct medical expenses, with the rest in lost productivity from ill patients missing work. Given the low-tax (or no-tax) underground cigarette economy on the Web and on Indian reservations, it’s unlikely that sales and usage have dropped much over the past decade, official government statistics notwithstanding.

Drugs. Estimated annual cost: $110 billion. Like alcohol, illicit drug use is more prevalent among the unemployed. Most addicts are also heavy drinkers, though only a small minority of alcoholics are drug abusers. Crystal meth has followed marijuana, cocaine and heroin as the drug of choice among the young set.

Overeating. Estimated annual cost: $107 billion. Overeating increases the risk of many health problems, including heart attacks. Obesity causes 14% of attacks suffered by males and 20% of those suffered by females, the National Institutes for Health says, and fewer than a third of adults get regular exercise. The bulk of the $107 billion is the direct cost to treat heart disease, osteoarthritis, hypertension, gall bladder disease and cancer.

Gambling. Estimated annual cost: $40 billion. Addicted gamblers often feel compelled to chase after bad bets with more money in the hope of winning back their losses. And some who catch the fever develop the need to periodically raise the betting stakes to keep the same thrill. Also, addicts often face job loss, bankruptcy and forced home sales, and they are at greater risk to commit crimes like forgery and embezzlement.

Now, I think the “annual cost” they list for each sin is bunk. They’re roping in the healthcare costs associated with these addictions. What would be more interesting would be to see the costs on a more personal level.

I dunno, like, if you smoke 4 packs of cigarettes per week, casually drink on weekends, eat out 3 times a week, snort a little blow now and then, and make an annual pilgrimage to Vegas, you’re throwing away such-and-such a number of dollars per year. You know, that type of thing, with a few different scenarios that readers might be able to relate to.

What struck me about the list was how they pointed out that the people that have these vices in their lives are stereotypically un-employed or low income folks. They’re kind of screwing themselves over two-fold. Living a dingy lifestyle with the job to prove it! Hooray for losers!!!

I hate it when, on some message boards (cough, MSN!, cough), someone comes along looking for advice on how to better themselves financially, and the ‘regulars’ all chime in and say, “get a better job!” in unison. I know from experience that that’s not always an option. And it’s a really obnoxious thing to tell someone.

But I will say, when you go to the grocery store, or really any retail outlet where the employee wage hovers around minimum wage, have you ever noticed that nearly every employee is a smoker? And many of them look hung over or, even worse, a little stoned? And the dead-to-the-world cashiers gossip about what happened at the bar last night while ringing you up? I know you’ve all been in that situation at your local Walmart. 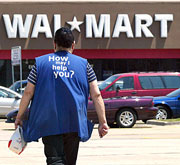 It’s funny though, from my point of view — they don’t realize that their money problems, while they do relate to the job they hold, aren’t *really* due to the fact that they work at Walmart and make minimum wage. The real problem is the lifestyle they’ve chosen for themselves. And it’s not necessarily the costs of their addictions. Outside of their job, they’ve lined themselves up for low wage employment.

I started at $6/hour along side the typical low wage group. Difference was, I didn’t take smoke breaks because I didn’t smoke, I didn’t come to work drunk or smelling like a brewery, I didn’t go to have a few brews over the lunch hour, and I never came in with a black eye from the bar brawl I was in last night. Really, actual co-workers of mine did and continue to do these exact things regularly.

I took my life seriously — and as a result my wage increased. It didn’t take long for my employer to notice that I wasn’t like some of the zombie-losers around me. Sometimes I wish I could snap some of these people out of wasting their lives away.

I used to feel bad for them. I even tried to help a couple of them, but it’s a battle you have to want to win yourself. They thought they were happy and now they’re jealous… apparently having forgotten that we started in the same place. The difference, the only difference is that we chose different paths OUTSIDE of the office.

As for me, I don’t smoke. I tried smoking out once in 4th grade. I dabbled in it a bit in high school too, but it didn’t stick. Even then, the real “cool” kids weren’t smokers, just the mean kids that smoked in the bathroom. I didn’t want to hang with that crowd. I’d venture to guess that they staff the Walmart in my hometown now. Either way, if I had the urge to smoke now, the costs involved would sway me otherwise. My home state recently up’ed the sin tax on cigarettes to $2/pack. Adding that to the regular price, well, it’s like lighting dollar bills on fire every hour or so. No thanks.

I don’t drink alcohol either. I’m not one of those people who thinks it’s wrong, or whatever, I just don’t really like the taste, or even the “buzz”, for that matter. I like who I am and how I am; no need to lower my own standards in the name of fun. I’m not really keen on feeling like crap afterwards either — it’s just not worth the so-called reward. And, like cigarettes, it’s really expensive. To think, we’ll shop at a different store to get Coca-Cola on sale, but even at full price, it costs $2-$3 less than a case of Budweiser… And I like to think I have better taste than that.

Drugs aren’t for me either. Like drinking, I don’t feel the need to change the way I am, even if it’s just temporary. I’ve also seen what they can do to people — and it makes you wonder why anyone would do drugs. Different strokes for different folks I guess… No clue on what the going rate is on whatever the trendy drug is these days, but I’d bet it’s safe to say that it’s not cheap.

Overeating? Hmmm… I do tend to eat until I can hold no more. But I’m not overweight. To relate this one to my own habits, I guess we eat out a little bit more than we should — and that’s one of the few remaining things that we could work on to save more money. Thankfully we generally don’t go out to sit-down full-service type restaurants, so the bill rarely tops $20 for the both of us.

Gambling…I guess I’ve always seen it for exactly what it is. It’s throwing money away. Giving my money away for the chance of *maybe* getting more back, with the odds against it, doesn’t sound like a good gamble. It also doesn’t sound like fun. It’s no wonder that when you see people plugging away at slot machines that they often have a drink in their free hand… Mixing the two, or three if you count the cigarette often dangling from their lip, is hardly a road to riches.

So I guess all I saying is that if you find yourself guilty of one, or more, of these “addictions”, well, being successful is going to be an even steeper hill to climb. Good luck with that.

As for me, I’m just thankful my hill is low grade… by design.