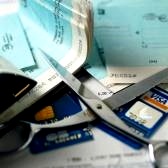 Now that the money needed to complete the siding project has hit the credit cards, and the first statements have all come in, it’s time to start paying things down.

It’s tough to figure out exactly how to attack it — I’m got a number of spreadsheets set up displaying all of the different scenarios based on who gets paid what and when.

For simplicity sake, I basically have around $7k on each of three credit cards. One is at 0% for another 8 months. The second is at a fixed 4.9% and the third, which is the card I carry, is at a fixed 9.9%.

Obviously, the third card at 9.9% is the one I should attack most aggressively. And ideally, I wouldn’t carry that card — adding a bit to its balance each month.

But that’s where the problem lies.

Card one at 0% was a balance transfer — the purchase APR is something ridiculous, so that card’s out for routine expenses like gasoline.

Now I could always apply for a new card, but I’m not real keen on adding yet another card. That, and I’m not sure I could get a fixed rate lower than 9.9% anyway.

Adding to the dilemma is the fact that I still want to be contributing to my ING Direct savings account.

Mostly due to the fact that once the contractors from the siding project are gone, I want to call in an electrician to do a little rewiring, then have a whole room redone — sheetrock, ceilings, floor refinishing.

Nothing huge financially, compared to the last two projects we’ve done, but I don’t want to pile it on as additional credit card debt. I want to pay for it with cash on hand from the savings account.

The problem is that my ING Direct only grows at a 4.41% rate. So, really, it would save me more money to abandon the savings account in favor of paying down the 9.9% credit card balance.

Okay, that’s a $12 difference. I realize I’ve over simplified the numbers in this case — in addition to the big payment, I’d also continue to aggressively pay in down, but is a $12 savings each month worth more than $2500 in your back pocket?

So I guess the plan is to continue aggressively on the 9.9% card, throw $250 each month at the 4.9% card, and $100 each month at the 0% card (while keeping in mind that it will jump to 13.49% in 8 months). If I don’t wipe out the 0% card before the promotional rate expires, well, I’ll have totally failed in saving any money, but I’ll worry about that in about 6 more months — and then go aggressively at it.

Looking at my Microsoft Money file, over the past three years, I’ve averaged credit card payments of $2196/month. With monthly payments like that, I should be able to payback my current debt in a flash, right?

Wait a minute! With payments like that, how could I possibly be in debt in the first place? Well, the problem was that I was also charging $1536/month. And when I started keeping track of my credit card balances, I was already $23k in the hole. Ouch.

The good news is that, until I charged the siding project, this year I’ve only be charging an average of $811/month. That still seems high to me, now that I look at it, but it still means I’ve cut my spending nearly in half.

The bad news is that I’m not paying back as much as I have in the path. I think this is due to the fact that I was putting so much into the savings account at the start of the year, and building up my checking account balance as well to pay for as much of the renovations as I could.

I hope that now that I’m not “saving”, I’ll resort back to my old ways and start averaging payments in excess of $2000/month to the credit card companies. And if I can cut that $811/month down some (I’ll look into what the hell I’m spending that much on later today), I should be able to snowball these debts down Dave Ramsey style, wiping out the 9.9% card first, and then the 0% card just before its rate jumps.