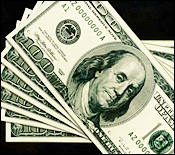 Tomorrow, when I post the monthly net worth update, it will be the second consecutive month with a considerable drop.

Obviously, when your net worth drops, there’s usually a cash flow problem at the root of it. And this month, that’s exactly what the problem is.

I brought in $5883 this month. That includes my regular paycheck, my side business income, interest income, and 401k gains (and this month, more accurately, losses). Sounds pretty good, right? Not my best month, but certainly not my worst one either. There’s no denying that that’s a lot of money.

Almost to the dollar, I spent double what I brought in. That’s never good.

Even if the markets hadn’t bombed last week, that still wouldn’t cover the $5888 I overspent, not even close, so I can’t use that excuse.

But looking closer at the $11771 dollars, and where it all went, I don’t really feel like I’m hemorrhaging money. In fact, I almost feel like I did a good job last month keeping my expenses down.

Eight thousand dollars went towards the home improvement last month. Removing that cuts the outgoing dollar amount to $3771 and, in turn, makes my cash flow positive again. That’s really good news for August! It basically means that (when I’m not doing major renovations) I’m bringing in nearly one and a half times as much as I’m spending — always a good recipe for debt repayment.

Then, taking into account the mortgage, the car payment, and the rest of the regular monthly bills and we’re under $2000/month spent.

Sadly, I’m not 100% sure. A couple of weeks ago in my “Credit Card Debt: Plan of Attack“, I mentioned that there was a rogue outgoing $811/month that was unaccounted for. I never did get to the bottom of that one either — and I have a feeling that it’s just a subset of this $2k.

Right now I’m thinking it must just be a bunch of small expenses adding up, but still, $2k is far too much. I *will* figure that out in August.

In the end, it’s always good to know that there is still room for improvement. I see so many PF bloggers mentioning ways to cut costs and nine times out of ten, I’m already doing what they suggest so it doesn’t help my bottom line at all.

So, if I figure out what I’m (still) blowing so much money on, and I’m not too ashamed to admit it, I’ll share it with you!

Success on the Scale