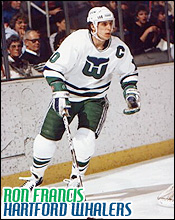 Earlier this week, J.D. over at Get Rich Slowly had an entry regarding his efforts over the past year to curb his addiction to collecting comic books and it’s something I could relate to.

While comic books aren’t exactly my thing (I can honestly say I’ve never read one), I too have a collection that at one point turned into an addiction and cost me a lot of money along the way.

My vice is “used” clothing. No, no, it’s not some gross perverted thing. It’s not like that at all. Specifically, I collect game used hockey jerseys. And believe it or not, they’re very expensive.

My collection currently stands at over 200. Among the collecting community (and, yes, there is one), that’s a pretty large collection. Not the biggest, but it’s right up there. I’d have to estimate that I’ve spend in excess of $75k over the years growing the collection. Yes, that would buy a lot of comic books!

Over the past few years, I’ve taken a step back while I’ve become much more aware of where my money is going. I’ll no longer use a credit card to buy a jersey. In 2002 alone, I spent a whopping $14k on hockey jerseys. That averaged out to well over a grand per month — FOR USED SHIRTS?!

This year has been my best ever, I’ve done my best to limit myself to one jersey per month and a top price tag of $200. I know, that sounds like a lot, but you have to think there are people out there shelling out that kind of money for a baseball card. Here, I’m getting the actual shirt the player wore in competition. That’s a lot cooler than a piece of cardboard in my opinion.

In the past, I had no ceiling. If I saw a Ron Francis Hartford Whalers jersey on the market for under $5k — it was destined for my closet. Those days are over.

Anyway, J.D. lists 10 Ways to Curb the Habit. Many of them, I’ve done in my own effort to cut the spending, others, well, they need some work.

1. Reduce exposure to hobby news. Unsubscribe from magazines and RSS feeds. Delete bookmarks. Try not to talk about your hobby with other collectors. The more attention you pay to your collection, the more you’ll want to spend money on it.

This…I have done. I used to get automatic updates from eBay whenever a jersey from a specific team was listed for sale. That’s a thing of the past. I also deleted bookmarks to dealer sites and the two big message boards in the hobby from my home and work computer. That isn’t to say I don’t visit gameworn.net (the better of the two) semi-regularly still, but it’s not as often as it once was.

2. Don’t be a completist. Collect what you like and will use, but don’t feel compelled to collect everything. For example, Marvel Comics publishes its Essentials series of comics compilations. It’s okay for me to purchase Essential Spider-Man — I’ll read that repeatedly and enjoy it. But why did I buy Essential Ghost Rider, a book I will never read? I only bought it to have the complete collection. That was a waste of $15.99.

I’m guilty of this. My goal is to have a game worn home and road from my favorite team from each season. It’s also a goal to have the jersey of the best player on the team — which naturally costs a lot more than an average player. With the 2007-08 season right around the corner, you can bet I’ll have my eye on certain players deciding which home and road sweater I want for my collection.

I’m past this. It used to be about the package in the mailbox for me — it was exciting. But now, it’s more about the hunt for specific shirts. I guess I am still doing it all for the “sake of collecting”, but I’m not as reckless about it as I once was.

4. Log how much your hobby costs you. Every time you buy a Beanie Baby, write it down in a dedicated Beanie Baby journal. Keep a running total. Begin to ask yourself: “Would I rather have this Beanie Baby collection or a new MacBook?” (Or whatever.)

Done. When I set up my finances in Microsoft Money, I set up an entire detailed category for the hockey jersey collection. The bottom line is what stunned me into action. Oddly enough though, I can’t think of one instance where I’ve experienced buyers’ remorse.

5. Budget. If you have a collecting habit but aren’t ready to give it up, consider setting a budget. Instead of compulsively buying every piece of Princess Diana memorabilia you find on eBay, allocate $25 or $50 or $100 per month. A collecting budget is an excellent way to allow yourself to indulge a habit without breaking the bank.

Done. Like I said, the new routine is one per month with a top price tag of $200. I don’t have a “rollover” plan in place if I don’t spend the $200 any given month, but over the summer, I did pick up a $500 jersey over the span of 3 months and steered clear of anything else tempting.

6. Set a limit. If you now own 20 Wedgwood pieces, you might limit your collection to 25 items at any one time. Whenever you go over this number, sell a piece to make room for the new one. I now have one bookcase for comic books — when it’s full, I’ll make room for new books by getting rid of something.

Can’t do it. There have been times, I’ve looked at the entire collection and considered selling off some of it, but… I dunno, I guess I just don’t see any real benefit from downsizing right now.

7. Narrow your focus. Is there a subset of your collection that interests you most? When I cut my comics budget, I began to concentrate on newspaper comic strips. They’re more entertaining to me, anyhow. And because comic strip compilations are more obscure, the hobby is more challenging. I spend less, but I have more fun.

Done. In the early stages, if I liked the color, or even the number on a jersey, I’d buy it. Not any more. My focus is on my team, and a couple individual players who used to be on my team. That’s it. There are still shirts that catch my eye from time to time, but I’ve been able to walk away saying, “It’s too bad he never played here…”

8. Instead of changing focus, you might collect something completely different. If your collection costs too much to maintain, switch to something less expensive. Instead of collecting old records, for example, you might pursue sheet music. Or canning jars. Or business cards.

Some in the hobby have done this sort of thing — when the cost of a game worn jersey became too great, they switched to collecting game used sticks, or helmets, or gloves. None of those things really interest me and eventually, you have to think that eventually it would lead to game used jocks. Um, no thanks.

9. Buy it later. As a collector, I’m often afraid that if I refrain from buying a book, it won’t be available later when I’m better able to afford it. That’s silly. While it’s true that I might pay a little more for some books, most will actually be cheaper down the road when I have my debt eliminated.

I’ve leaned this direction for the past year or so. Resale value on star players is very good — often times you can make a lot of money on your initial investment. Marginal players though, drop. So instead of buying them direct from the team or even a connected dealer the minute the player is finished wearing it, I’ve been holding off and waiting for them to hit the secondary market on eBay or craigslist — often times for far less than their original price tag. I don’t always get the player I want this way, but it still fills the holes in my quest to “complete” the collection.

10. Enjoy what you have. Take pleasure from the items you already own. When was the last time you listened to each of the albums in your CD collection? Have you looked through all your baseball cards?

This used to be a problem. We solved it a couple of years ago by purchasing a heavy-duty industrial clothing rack. We set a room in the house off as the “Jersey Room” and I can hand well over 100 of them on the new rack — it has this “colorful wall of polyester” look to it and each day I’m reminded of the size of my collection. It’s been a good thing and it’s kept me from adding to my collection so rapidly.

All that said, while the collection, not to mention the addiction, has certainly cost me loads of money over the years, it has had its bright spots. As I mentioned, if you select marketable players, the value rarely drops and often times increases.

My collection has become a, sort of, emergency source of funds to fall back on. Would it hurt to sell that Ron Francis jersey? Yes, it would, but to know that I could probably get $7500 for it… well, that makes it hurt a lot less.

I’ve only sold maybe 10 jerseys ever, and that was when I was generating funds for the down payment on my house. I remember vividly how my dad turned his nose up at the fact that I was blowing entire paychecks on dirty ripped shirts only to see me come up with $8k in the span of a week selling those “worthless” pieces of clothing.

Slightly off topic, but I did end up re-acquiring all but one of the jerseys I sold back then, so if the owner of a 1993-94 San Jose Sharks Bob Errey road jersey is looking to sell, let me know! I’d really like to get that one back.