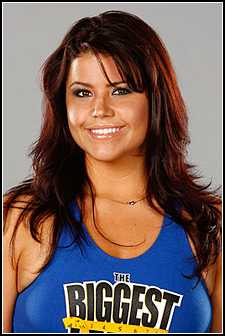 I admit it. I watch The Biggest Loser on Tuesday nights. All two hours of it. Every week.

I remember when the show first started a few years ago. I didn’t watch it back then.

I often wondered, who would want to watch a bunch of shirtless people go to Fat Camp? I mean, if Richard Simmons isn’t involved, what’s the draw?

But last season, for reasons unknown, my wife and I watched the first episode. I was hooked. Even had a television celebrity crush on Brittany — that’s her pictured. She was one smokin’ fat chick.

Anyway, we watched it religiously through the entire season. It blew my mind to see these huge people morph into, well, people you wouldn’t even consider overweight (though in most cases, they were still a little heavy.)

Then, as with most weekly elimination reality shows, the wrong person won. That left a sour taste in my mouth — the show is stupid.

But this past Tuesday, my wife and I watched the season opener and guess what? I’m hooked again. No television crush this time, I just like the show.

I hate Jillian — not a fan of screamers. I realize some people need that type of treatment to get off their, um, fat asses but I find that I’m more motivated by someone with Bob‘s approach.

The whole thing kinda reminds me of running track in high school. We distance runners would all go up to the weight room and try to hold our own among the fat guys who threw heavy things (shot put and discus). They spent a lot of time in there. We, being walking stick men, obviously did not.

They, the chuckers and hurlers, had their own coach who was, well, a yeller. You know, screaming at them and calling them degrading things in an effort to get them to do more. I’d say he got mixed results.

Our coach, Kurt Fioretti, infrequently even came into the weight room, but his approach was a lot more like Bob’s. Always encouraging. He made us think we could do anything — and often times it was successful.

I’ll never forget at an elite invitational meet where I didn’t really belong, way outclassed, and he handed me my race number — you know, the stickers you see some runners stick to their bare legs whenever track & field is on television. 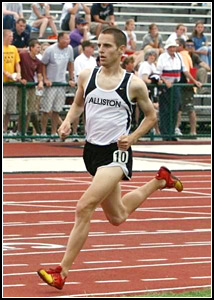 Well, those numbers are seed numbers. If you’re expected to finish first, you get the number one. Second, you get number two, and so on…

He handed me number 3.

“Number 3?! Are you kidding? Have you seen the field?”

Now, at the time, the fasted I’d ever run the mile was maybe 4:56. That was a decent time for a high school miler in the early 1990’s, but that kind of pace at this specific meet would put me a distant last.

Just being there, I was at risk of embarrassing myself.

No, make that, I was at risk of humiliating myself and the town name emblazoned across my chest.

I remember lining up at the starting line and having that uncomfortable feeling of those around me wondering who the “new” guy was.

The first lap wasn’t a problem — I’d never had a problem hanging with the studs at that point. The pace was faster than I was used to but I had it in me to stay up front — leading actually.

By the second lap, I knew I was out of my league. I was still leading but there was no way I’d be able to maintain this type of pace.

My coach was running back and forth across the infield so he could cheer me on the back stretch and the home stretch (something he’d never done in the past) mispronouncing my name the whole time, “C’mon Breeny! You’ve got this… Stay strong, you’ve got this Breeny!”

In the end, I didn’t finish first.

I didn’t even finish third like I was supposed to.

After that, I never looked back — and that’s what I see on the show, primarily from those being trained by Bob.

Some motivation, a little encouragement, some shocking results, and then you’re off and running on your own.

It’s a good feeling, even if you’re feeling it vicariously through some really fat people while you lay on the couch with your pants unbuttoned eating ice cream.

I guess what I’m saying is that if you’re looking for a little encouragement for say, hmmm, how about putting more money in to savings, this show is a pretty good start.

No, it’s not about money (though there is the token cash prize at the end), but it’s not really about losing weight either.

It’s more about changing your ways to reach your goals. Some people need to be yelled at Jillian-style, others just need to be encouraged Bob-style. There’s a little something for everyone — just insert your own goal in place of losing weight…

(Now can someone get NBC to speed up the weigh-ins? Seriously, they draw that out for half an hour each episode… Totally unnecessary…)