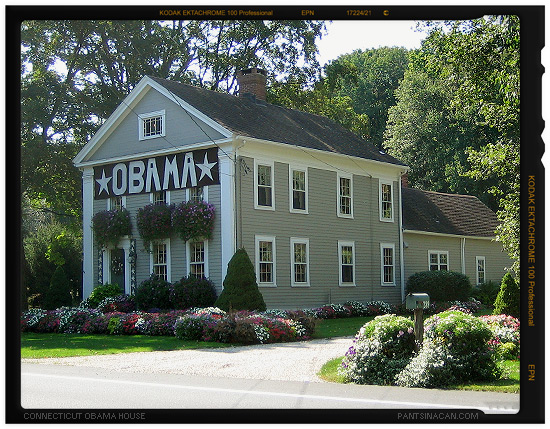 I took this picture over the weekend in my home town here in Connecticut.

It’s been one of my favorite houses since I was in high school — though, back then it didn’t have its latest decoration.

I try not to get too political on here — I think politics have come up maybe once or twice over the past year — but there’s no sense in hiding who I’m going to vote for.

No one. That’s right, I won’t be voting this November.

I can’t vote in the election because I’m not an American citizen.

But that isn’t to say that I can’t support one candidate or the other.

And it appears that he’s the guy for most people my age — which likely has to do with his stance on war, the environment, gun control, abortion, stem cell research, immigration, health care, the economy, taxes, etc…

That is why I’d vote for Obama if I could.

It’s also why I’ll encourage those who can vote to vote for Obama.

Watching both conventions on C-Span (without any pundits or random talking heads swaying my thoughts), the one thing that was blatantly apparent was the difference in each parties approach and delivery.

The Democrats talked about all the great American things that had happened in the past and that could happen again in future.

The Republicans, on the other hand, spent most of their time talking about all of the things we should be afraid of if we don’t vote McCain.

It’s just a different strategy. And I understand that.

But like my Biggest Loser post — I prefer to be inspired rather than threatened. That’s what motivates me and makes me feel good.

That, and combined with Biden (who seems like a regular Joe to me), the Democrat ticket is just a lot more relatable… More like, well, typical Americans… like I pretend to be, even though I’m not.

John McCain is definitely qualified to be President. I’m not sure anyone out there has ever said otherwise — he’s been around forever, it seems.

I have always found it odd, though, how he’s been supported by the religious right (which I can’t understand — just cause Huckabee drops out, they support the next guy?). I mean, Senator McCain has demonstrated quite well, in the past, that he lacks morals.

I love how people were so quick to pile on John Edwards for infidelity when John McCain did the exact same thing (worse actually). I mean, you’d think the bigger story would be on the guy who’s actually a nominee…

Blame it on being a POW — sorry, I’m not buying it.

I’ve also seen quotes where they say that end of his first marriage was because he was turing 40 but acting like a 25 year old. I dunno, I’d like to think that a potential President of the United States would’ve grown up long before turning 40, but maybe that’s just me.

And seriously, how’d he bury the whole Keating Five thing? I mean, in the grand scheme of national politics, that was a pretty big blunder.

Have people forgotten that too?

McCain can take a great deal of credit for the recession of the early 1990’s. In today’s financial climate, I dunno, I think that’s kind of relevant.

And you’d think a scandal that big would disqualify you from running for President. Apparently not.

Wrapping Cindy McCain into the picture, and again, it’s tough to relate to John McCain. No one in my family is a gold digger and no one has a trophy wife (with a serious painkiller addiction) either.

How about your family?

And I’m still not sure why his poor health isn’t a bigger issue. I mean, remember all the hoops the media leaped through with Dick Cheney and his bad heart?

McCain has had pieces of his face removed this calendar year and there’s barely been a mention… Last time I checked, skin cancer on a 72 year old was a pretty serious issue.

The part of McCain’s platform that makes me laugh out loud every time is when he says the US economy is strong. He justifies it by saying that the US worker is the hardest worker in the world and that’s why we have nothing to worry about.

I’m sorry, but has John McCain ever been to Walmart? Who is he kidding? Unfortunately, these days, it seems that the average US worker is more interested in taking cigarette breaks and talking on their cell phones than actually working.

As for Sarah Palin, well, maybe it’s just me, but Alaska is pretty, well, meaningless. I mean, who are they kidding? That’s like saying that if it weren’t for South Dakota, the country would fall apart. It’s just not true. She “changed” Alaska. Honestly, does a changed Alaska mean much to the lower 48?

Sure, in the Senate, all 50 states are equal. That’s why there is also a House of Representatives, and there, Alaska is irrelevant with just one seat. One. I have nothing against Alaska, or any other small state (Connecticut included), but to claim that any of them greatly effect the US as a whole is just ridiculous.

As for her family life, well, again, I can’t relate.

I’m sorry, the campaign can claim that her family is the “typical American family” but is it really to the point where it’s typical for Mom to have kids within a few months of their daughter?

“Hey, meet your uncle Trigg… Sure he’s only 3 months older than you, but that’s how it is in the typical American family of the 21st century.”

Um, not where I come from…

We don’t fire semi-automatic weapons on the weekends either…

Remember when Bill Clinton was deservedly raked over the coals by the RNC for lacking “Family Values”? Conservatives were all over him.

In comparison, can you believe the Republican ticket in 2008? It’s unreal.

That said, I’ll still say that Sarah Palin was a much better pick than Joe Lieberman would have been and he’s supposed to be the guy representing me in the Senate. Grrrrrrr…

My parents are Republicans — at least my Dad is, for sure.

I attribute this to the fact that he shook Bob Dole’s hand back in 1996. Bob Dole’s left hand, I assume. But had it been Dick Gephardt or, gasp, even Bill Clinton, I think he may have been swayed the other way. On second thought, maybe not, he listened to Rush Limbaugh an awful lot too…

I listen to Rush too, though… Who knows?

But this election is different, I think.

In 1996, the first election that I would have been old enough to vote in, I’d have voted for Bill Clinton. No doubt in my mind. Bob Dole was a disabled old dude, and Jack Kemp was a crappy quarterback. Hey, I never said I had a good reason for not wanting to vote Republican…

In 2000, I’d have reluctantly voted for Al Gore. He just seemed a lot more likeable to me than George W. Bush. Though, had he won, I have to wonder how far he would have gone with his whole “going green” mission.

In 2004? Probably George W. Bush — though now I’m embarrassed to admit that.

Most presidents are terrible in their second term.

In fact, in my life time, all of the second terms have been less than stellar, but GWB has taken it to a new level.

Really, what I’m saying is that I can’t claim to support one party over the other.

The Governor of my state is Republican. And terrible. Just terrible.

I’d vote to oust both of them if I could…

But I have noticed something about this year’s presidential election — if you’re over 45 years old, you tend to lean towards McCain. Under 45, you lean toward Obama. Party affiliation doesn’t seem to matter so much.

Sure, there are exceptions, but just comparing “groups” on things like Facebook (where the demographic is primarily under the age of 45), Obamaholics outnumber McCainiacs by huge numbers. As of today, 1.8 million to 537k. It’s not even close.

Problem is, will those young people vote? Probably not…

John McCain will win the election but Barack Obama will easily have the popular vote. Americans will again fail to understand the dynamics of their own government and through a few supreme court nominees, McCain will set the US up to be left in the dust of other countries (as if we haven’t been left in the dust already…)

I’d originally just wanted to put the picture up (cause I thought it looked neat) and move on but now I’ve rambled on with a poorly worded, enormously unconnected, disjointed, and somewhat politically motivated, rant-a-thon-a-saurus…