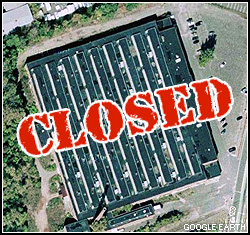 Today, at work, I botched a T-SQL script big time.

They should be the same, as they are in many other languages, but they’re not in SQL.

Needless to say, it took me some time to debug and a project that was supposed to go live this morning didn’t get started quite as early as I would have liked.

With no where to turn, I jokingly blamed…the economy.

Seems everyone is playing that card right now…

Near my house, there’s a small steel fabrication plant. Small is a relative term, though. The building is freakin’ huge. The parking lot is even ‘huger’.

They make blades, springs, gears, and other sprocket and cog type things — I think. I’d also venture to guess that it’s one of the top ten employers in town.

At least, it was…

Back in November, the laid off their 3rd shift employees. Every single one of them.

The place used to be crankin’ 24 hour per day, but by Thanksgiving, the place was dead as soon as the sun set.

The company blamed, yep, you guessed it, the economy.

Then, right around Christmas, they had an extended holiday shutdown. It lasted three weeks, during which time the company announced that the second shift wouldn’t be coming back.

They didn’t even plow their parking lot during this time — really, the place looked abandoned.

Again, they blamed the economy.

Then, last week, they laid off 50% of the few remaining employees and announced that those that were still employed would be taking an across the board 5 percent pay cut.

Oh yeah, they only have a 32-hour work week now too so…make that a 25% pay cut. Across the board.

It doesn’t take a scholar to come to the conclusion that the economy is apparently to blame.

A little over two months ago, this place had a full parking lot, a staffed security gate, and blinking lights flashing through the windows (I’m guessing from forklifts driving around inside or something.)

The security gate was up, there wasn’t a guard, and there were just three cars in the parking lot — one still covered with snow. The place is dead.

It’s almost as if a supposed mood or an outlook can cause job losses like this.

And to explain it all, the best they can do is play the economy card?

The Devil is in the Details