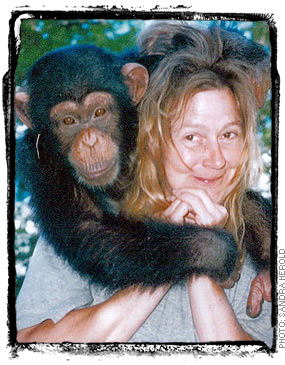 It’s the big news story here in Connecticut now that the “Travis the Chimp” hoopla has finally subsided.

It always exciting when your own neck of the woods makes the national news but, of late, most of the news recently has been rather embarrassing for Connecticut.

(Before the chimp attack, it was this hit-and-run.)

For the record, no, I do not personally know anyone that has a pet chimpanzee. That’s even weird for Connecticut.

But now the focus is on Jerry Springer.

See, our governor Jodi Rell, who has always had through-the-roof approval numbers (easy when your predecessor went directly to jail) but is actually a horrible governor, comes up with terrible ideas on an almost weekly basis.

And usually a week too late.

For instance, it’s damn near impossible to have a Chimpanzee as a pet in Connecticut now. Last month, though, sure, if you wanted one, you could get one if you knew the right people.

If there’s a big car accident, she’ll propose widening the road. Cost is no issue. Doesn’t matter that the driver was drunk — if the road had been wider, it would have saved lives. Yeah, okay…

Really, that could be her legacy… She made the roads wider to accommodate drunk drivers.

Oh, and she added runaway truck ramps because of the mountainous terrain here in Connecticut. (For the record, we have rolling hills, NOT mountains — but we have runaway trunk ramps just like Colorado does… Thanks Jodi! Those were well-spent taxpayer dollars!)

Anyway, under her rule, the State of Connecticut has offered HUGE tax incentives in an attempt to turn Connecticut into the Hollywood East. I’m not making this stuff up…

So we undercut Hollywood Mid-West?

And all we got was Jerry Springer?

Anyway, right now, this “acquisition”, if you could call it that, has everyone all excited about the additional tax revenue that will be coming to our state.

First off, the tax incentives offered — and their willingness to pick up and move to Connecticut even though Jerry is fighting it — probably means that they won’t be paying ANY taxes.

That, and on a personal note, I’d much prefer it if the scheduled guests weren’t staying in hotels in my backyard.

Based on what I’ve seen on the Jerry Springer Show, many of them are more frightening than a rampaging chimp.