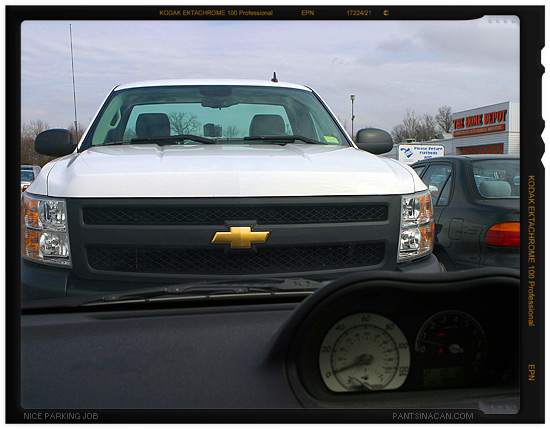 My wife and I were still in the car when this dude pulled in to the spot in front of us. I couldn’t believe it.

While it may not be noticable in the photo, he’s about 3-inches from the hood of my car… and a good foot over the yellow line painted on the ground.

Granted, I drive small cars that don’t take up an entire parking spot but I like to think of the extra space on all sides as a space cushion of sorts.

Protection for my vehicle, you know?

But for whatever reason, there’s always a pick-up or SUV (and it’s ALWAYS a pick-up or SUV) that uses my car as a guide for where to park rather than the lines painted on the pavement.

I’ve had a front grill smashed this way so I’m usually very selective when it comes to parking. You know, against a curb, next to a minivan with sliding doors, or way off to the side and no where near the entrance…

On this day, though, I just parked among the masses as it wasn’t very busy.

And then this jerk pulled in. Way. Too. Far.

He didn’t hit me, thankfully, but his door did touch the car next to his when he got out.

I know I already called him that but he deserves it.

In hindsight, I shoulda left a post-it on his window with the message, “Hey, I almost stole your clearly visable GPS unit but you parked so close to that GEO Prizm next to you that I couldn’t get your door open…”