That time, it was replacing an ancient light fixture — this time I was taking on the kitchen sink. 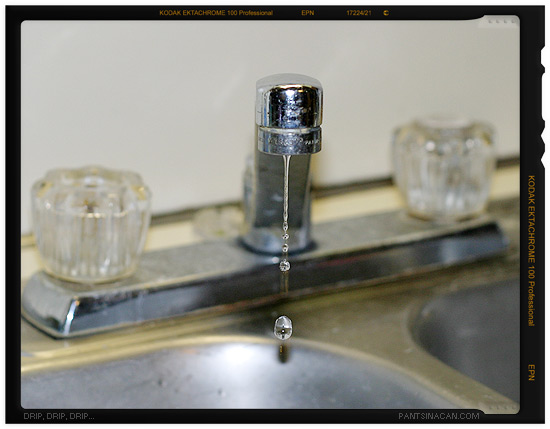 Look at that thing?! It’s like a combination of a kitchen and bathroom faucet all in one. It’s horrible!?

Now, it’s also dripped since I bought the place back in 2002. I know, I know, I should’ve done something long before this weekend but it never really seemed to be a priority…

A couple of weeks ago, though, the drip turned into a stream. Then it started to whistle. And then I noticed that it was the hot water that was running 24 hours per day.

Hey, this is probably costing me a pretty decent chunk of change…

So off to Lowe’s we went to pick up the cheapest (but better) “kitchen” faucet they had. It was around $39.

The instructions said that the new faucet should take around an hour to install.

No problem, I thought, I can do this…

I turned the water off and proceeded to remove the old faucet.

Hmmmmm… It didn’t take to to realize that this was going to be harder than I’d thought… Nothing was moving. Nothing.

I made a quick trip to Home Depot to buy a monkey wrench and some WD-40 to loosen up the the nuts on the copper pipes.

With-in minutes of being WD-40’d, I had the water pipes disconnected but I still couldn’t get the old faucet off of the sink.

The underside was held down by these big plastic wing nuts that were fastened so tight (courtesy of corrosion) that I couldn’t get them to budge. Really, even if it weren’t such a tight cramped space, I don’t know that it would have been possible loosen them — they were that tight.

Another trip to Home Depot — this time to purchase a mini hack saw. My plan was to hack saw through the plastic wing nuts.

The plan was a total failure though as there wasn’t enough room under (and behind) the sink to get the saw blade up to where the wing nuts were. Argh?!

In the process of attempting the impossible, I’d managed to loosen/mangle things up enough on one side to slip the hack saw between the sink and the faucet so I cut right through the copper pipe (above the countertop). Hack saws are the best.

On to the other side… Crap. It was still flush with the sink so the hack saw wasn’t going to get the job done…

Out came the drill…even though it wasn’t listed a tool “needed” for installation.

From under the sink, I started to drill the plastic wing nut, here, there, from this side, from that side and then, suddenly, it started to give! No, not fall apart, but actually spin!

I unwound it, thinking, sweet, I’m almost there, and then it stopped. It wouldn’t move. Ugh…

So, since it worked on the other side and now that I had a little give, I went back to the hacksaw method.

Five hours later, I’d drilled and hack sawed the old faucet from the sink. Really, the one plumbing tool I’d purchased (the monkey wrench) was of no use. None.

Twenty minutes later, we had a new faucet. 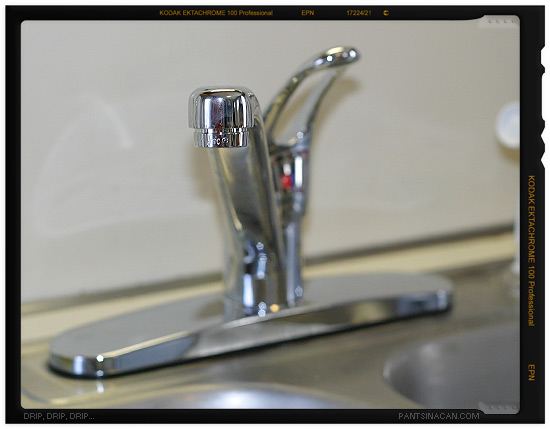 I swear, the home improvement projects that I attempt would be *so* much easier if they were more of the addition kind rather than the renovation sort.

It’s not pretty but at least it doesn’t leak…

Embarking on a Nonsensical Payment Schedule