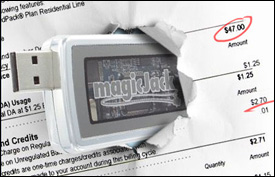 This morning I just paid what I’m hoping was my last outrageously overpriced AT&T phone bill.

Sure, it was only $56.05, which isn’t exactly a huge sum, but grand total, we made 6 phone calls during the billing period.

That works out to almost ten bucks per call.

Obviously, we weren’t getting our money’s worth — and — that’s the cheapest rate AT&T offers. We can’t lower it.

Now I know a lot of folks have dropped their land line in favor of their cell phone but if you’ve been reading PIAC for awhile, well, that probably wouldn’t be a great option for me.

Though, again, back in 2007 I started saving a TON on that front too…

So, anyway, we went out and plunked down $39.99 for MagicJack at Target.

If it worked, it’d save me a ton of money each month.

If it didn’t work, well, it was a $40 experiment gone wrong.

Forty bucks to possibly save between $50 and $80 per month — that’s a gamble I’ll take every day of the week.

But like anything that’s guaranteed to save you lots of money, there are a lot of skeptics out there and they’re all overly vocal on the internet. It’s kinda sad actually.

If you look up a review of MagicJack, or any similar service, or anything, for that matter, on the internet, chances are, the negative reviews will outweigh the positive reviews ten-to-one.

My favorite was this one guy who called it a piece of crap and a rip-off because, as he regularly travels the world from Botswana to Mongolia, his elderly mother in Arkansas can’t make her daily call to him as if it were a local call…

Okay, how many folks can relate to that?

Not many, I’m guessing.

See, it seems that the people that call things like this a rip-off and a piece of junk are expecting a bit too much. They expect a miracle.

This world traveling MagicJack-Off actually expected to save multiple thousands of dollars each year on his very unusual phone bill by making the switch.

But saving nearly $1000 over the span of a year, well, that is realistic. And MagicJack can and will do that for you.

So, from a money-saving perspective, MagicJack gets two blue thumbs-up from PIAC. It provides the exact same services we were paying over 10 times as much for from AT&T.

We didn’t need to switch phones — still the same phone I picked up last year using those goofy credit card reward points — we still have caller id, and we don’t need our answering machine anymore cause we have voicemail now (it’s pretty neat too, we have it set up so that if someone leaves a voicemail, both me and my wife get an email of the recording).

This thing is great — and we don’t need to pay another dime until this time next year when it will be $20 total for another freaking year?! How great is that?

For me (the guy who rarely uses the phone anyway), at a minimum, that’s a $600 dollar savings right off the bat.

For you, well, yeah, you could hit 4-figure savings in just one year!

Now, are there any downsides to MagicJack or is it all unicorns and rainbows?

Well… I’m not really a fan of their control panel interface. It’s got a big old advertisement for, well, MagicJack plastered all over it. It looks goofy and, well, kinda amateur. It’s unsightly.

The simple solution to that is to minimize it and just use the regular phone to make and answer calls.

Yeah, I’m old school. I like to press the buttons on the phone. Besides, you don’t actually need to look at the control panel for anything anyway…

The other issue — and this was kind of disappointing — was that our area code wasn’t available.

The beauty of using an “internet” phone is that you can “pretend” that you’re anywhere. That’s what that Botswana-dude was trying to do — he picked a local Arkansas phone number so that his mom could call him as if it were a local call — even though he was never anywhere near Arkansas.

His failing was that internet service sucks in Botswana — which he laid 100% of the blame on MagicJack… What up wit dat?

The thing is, say you order a pizza from your local pizza parlor here in Connecticut or something… They’re not going to be real cool with someone placing an order from phone with a California area code — at least not until this sort of thing becomes more common which…I’m certain it will.

In the end, though, we were able to select an area code that’s also in Connecticut, though not our own, and then the exchange we wanted — so, as of now, Pants in a Can is coming to you live from the extravagant city of Greenwich, Connecticut.

I mean, now that I’m saving so much money on my phone bill, you know, maybe I’ll be able to afford to move to Greenwich for real…