CLOSE
Home Bargains Hitting the Casino for the FREE Entertainment 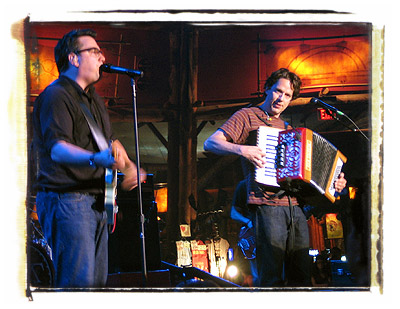 So, last night, my wife and I headed over to the Mohegan Sun casino in Connecticut for a free show by my favorite band of all time, They Might Be Giants.

They did a free show there last year and, while we had to stand in a line for 4 hours, it was good enough to have us head back again this year.

We stood in line for a good two and a half hours this time and had seats almost as good as last. In fact, the nice couple from Providence we shared a table with actually made the seats seem even better than last year.

While standing in line before the show, John Flansburgh (one of the two band members) quickly walked down the line handing out free stickers — and upon reaching me said, “Hey, nice t-shirt!” in regards to the 15 year old concert t-shirt I was wearing from their 1992 tour. I ‘sort of’ had a conversation with him. By ‘sort of’, I mean I just said “thank you” in response, but like I said, he was moving quickly and I wasn’t about to slow him down.

Anyway, what really stuck me was that *no one* in the line seemed to know who he was!?

Honestly, I’d think that if you’re the type that is willing to stand in line for hours on end to see a band as obscure as TMBG — chances are, you know exactly what John Linnell and John Flansburgh look like. You’d think anyway.

That experience was pretty cool. Not saying it’s one of those moments I’ll never forget in my life, or anything, but it felt pretty good.

Making the night even better, as we were seated, we were each given a signed copy of their newest album, “The Else“, which just came out earlier this month.

This worked out great as I’d not yet purchased the album (that saved me some coin), and the albums were both signed.

I’d always kind of wanted their autographs too, and checked on eBay every now and then for them, but it was never anything I’d consider paying a lot of money for. I’ve just always wanted to collect autographs of the people I liked from my youth. Silly, I know, but now John Linnell and John Flansburgh can join Wayne Gretzky, Gordie Howe, Bobby Hull, and Bill Gates (I think his was done with an auto-pen) in my tiny collection.

The concert wasn’t as good as last year, as it heavily favored the new album full of songs that few people knew. But they played the standards you’d expect like “Istanbul”, “Birdhouse in your Soul”, and “Dr. Worm”. That last one I call a standard, but being an old-timer now, I think of it as a “new” standard.

They threw in a couple of old ones that I’d never seen live before like “Put Your Hand inside the Puppet Head” and “Letterbox” and one that I hadn’t heard since the 1992 tour, when I saw them twice, “Twisting in the Wind.”

Those three got some of the better crowd response. Or, more accurately, I thought so anyway — it was probably just the 30+ crowd that had actually heard those songs before they were re-issued on compilation albums — or owned them before CD’s even existed.

On the way home, we listened to the new album — not sure it’s a great one, but it’s definitely better than the last few they’ve released.

When I was a teenager, they were one of those bands where I could listen to the entire album through and through over and over again. That lasted for, well, I’d say their first 5-6 albums. Essentially, 1986 through 1994.

After that, for the next 6 albums, well, let’s just say I’ve used the fast forward button from time to time. That said, each album definitely has had at least two songs that would have fit seamlessly into their first group of albums, so they keep me coming back for more.

In the end, had I not bought a $25 t-shirt, the night would have cost $5 total. Two $2 sodas and a $1 tip. Not bad for a concert where you get to sit maybe 10 feet from the band and you get two free signed CD’s which just came out in stores at around a $15 each.

The Most Vocal are Usually the Least Informed