CLOSE
Home Bargains Culture, Cows, Tractors, Monsters, and did I mention Cows too?

Yesterday, we traveled up to Vermont for the 7th annual “Strolling of the Heifers“. It’s exactly what it sounds like — a parade of cows.

This year didn’t seem to have as many cows as last, but that could have been due to the weather. It was damp and misty in the morning and soon turned oppressively hot and humid. I’m not sure what the ideal weather for a cow is, but I’m guessing they’re not at their best in these conditions.

So, at the risk of turning PIAC into a weekend photo blog (And with this new layout I debuted last week, I can make the photos even larger — not always a good thing!), here’s this past weekend’s recap of the FREE entertainment… 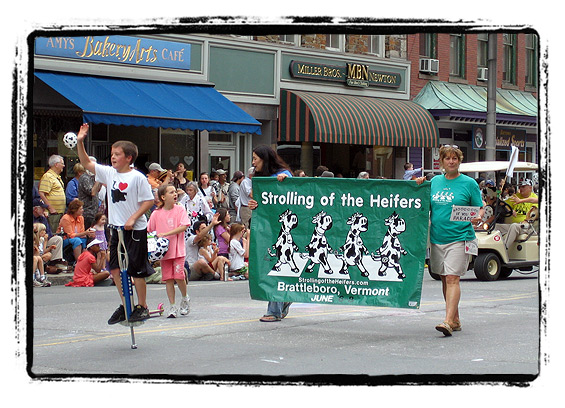 The parade stepped off about 15 minutes late, but word spread quickly among the crowd that the cows were ‘moo’ving and the excitement began to build. Notice the kid on the pogo stick out front. How he managed to bounce all the way up a street for the length of the parade astounds me. Have you ever tried one of those things? They’re darn near impossible… 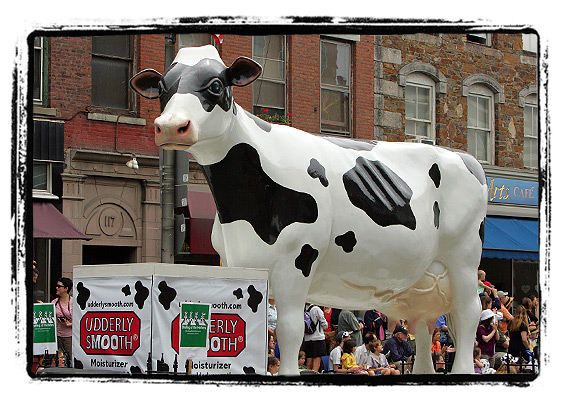 YES! There’s nothing cooler than a huge fiberglass cow that’s sponsored by a make-up company. Is Udderly Smooth Udder Cream for people? Or is it for cows? I’m not really sure. 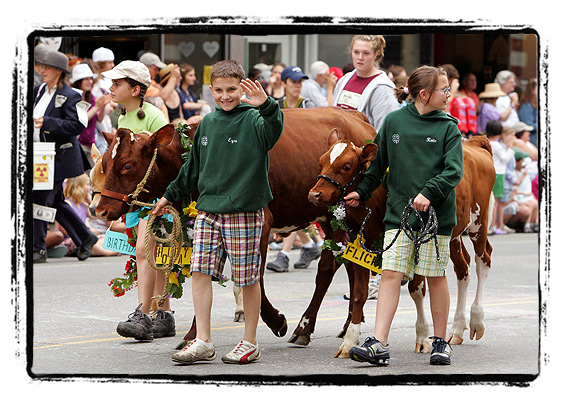 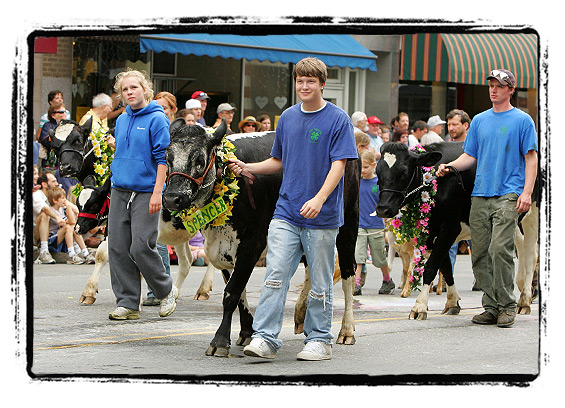 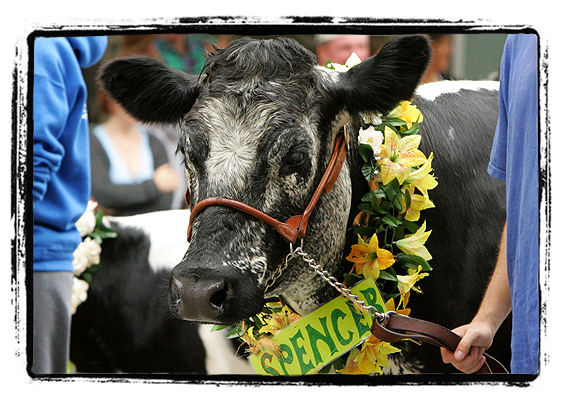 Here come the real thing. Moo! I think Spencer was my favorite. Usually I like the brown cows (they make the chocolate milk), but Spencer looked pretty neat. Friendly too! 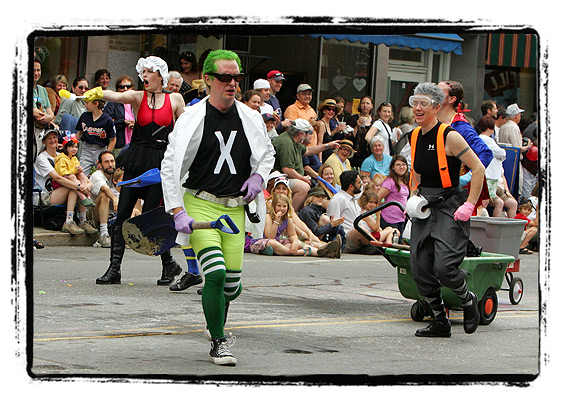 After the cows paraded by, an eclectic mix of superheroes, all of indeterminable sexual orientation (not that there’s anything wrong with that), came around to scoop up the poop. They were, well, odd but par for the course in this part of Vermont. 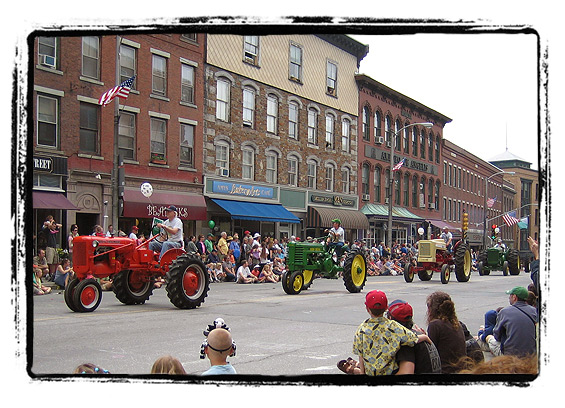 Seems tractors are all the rage these days in parades — agricultural or patriotic. The funny thing is — the tractors were a lot more impressive in hoity-toity Connecticut. Go figure. 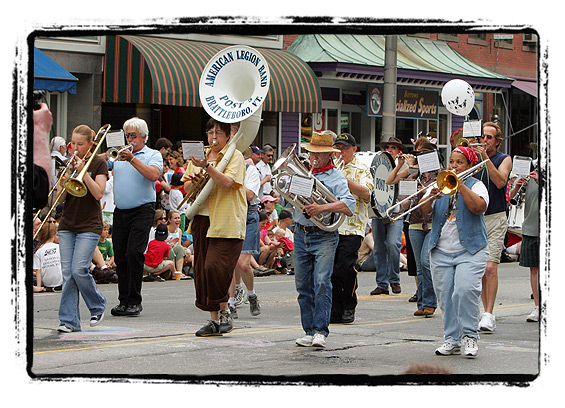 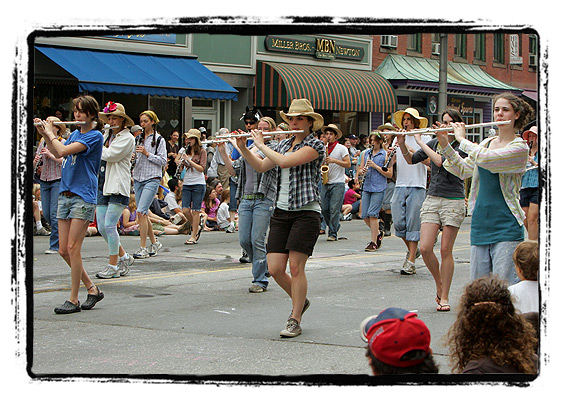 After the tractors came the bands…

I like how low-key things are in Vermont. Notice that neither group is wearing an uncomfortable uniform in hot and humid weather. I dunno, most of the bands in local parades (especially the school bands) look sloppy all on their own. Dressing them up isn’t going to change that, so why pretend?

The high school band in the second picture even did a little square dancing as they marched up the street. It was a lot more entertaining than watching a bunch of stiff, yet still out of step, marchers like we did for Memorial Day.

Musically, it was a little odd. They were playing “Hoe Down” from Copland’s Rodeo. For those that aren’t dorks that stayed in the high school band all four years like me, that’s the song from the “Beef… It’s what’s for dinner” commercials from the early 1990’s.

Hey with that at your back, it’s no wonder the cows were willing to march. 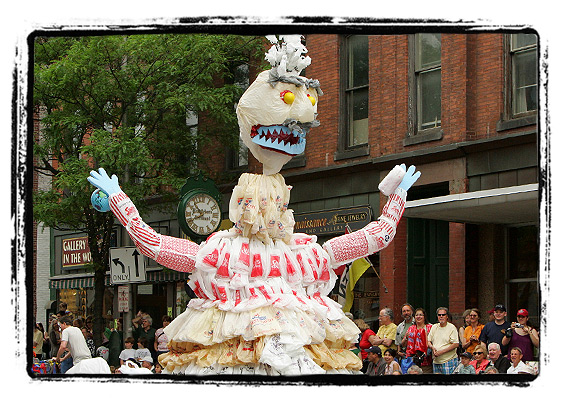 Then the parade took a turn towards the edgy and controversial side. Yep, that’s a bag monster. It kills baby seals and suffocates birds. Nice, huh? Well, just be sure not to use plastic bags anymore. 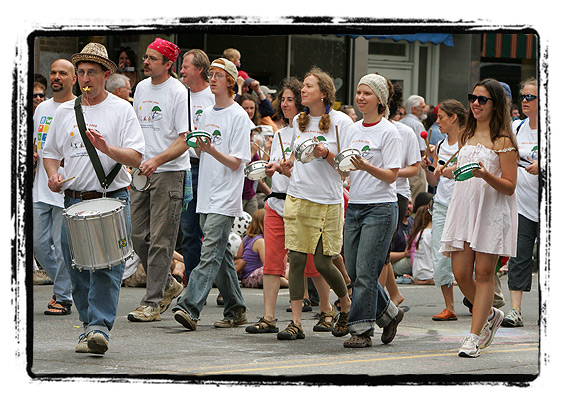 Some sort of hippie hand drum band or something. Not sure what their message was exactly — something “green” I’m sure — but they certainly made a lot of noise. 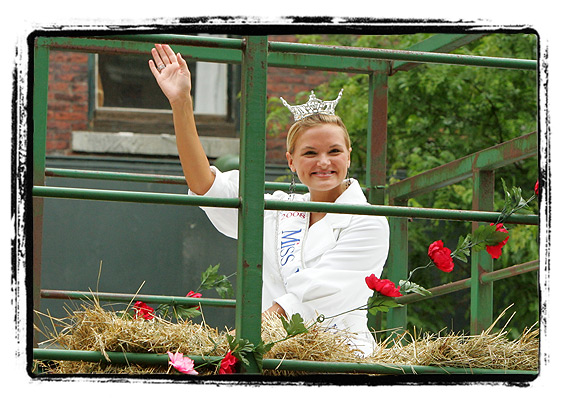 Hey look, it’s Miss Vermont, Ashley Wheeler, sitting on a bale of hay! She looked a lot better when she was crowned.
Sometimes I wonder if these girls know the hardships of the job – I may be off base, but it looks like it’s taking a toll on her.
From her own blog, “I am not sure exactly what to expect but I am certain cows will be ’strolling’ down main street. I am contemplating dressing in black and white as to blend in with the heifers.”
I mean, I wouldn’t really like to go for a hay ride all dressed up. Would you? And is it just me or is it really stupid to wear white when you know you’re going to be sitting in a rusty trailer filled with a bunch of hay? Apparently, she didn’t know.
Really though, can a parade really be called a parade without at least one beauty queen swiveling her forearm like the real Queen? 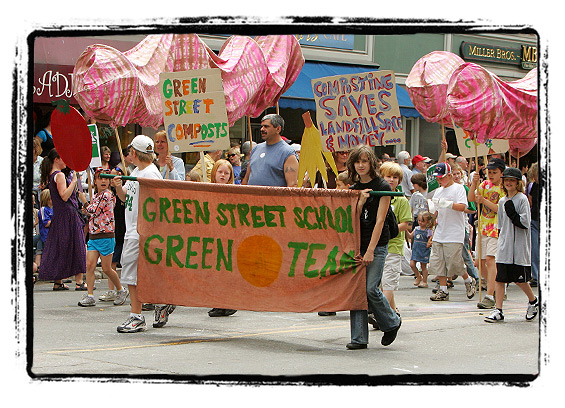 You know, when I was in elementary school, they didn’t teach us that “Composting saves landfill space and money.” We also didn’t make giant rotting fruit picket signs or gross hoop monsters that look like earthworms either. I think the schools should spend a little more time teaching kids to look both ways.

In the end though, these kids were *very* enthusiastic towards their cause. 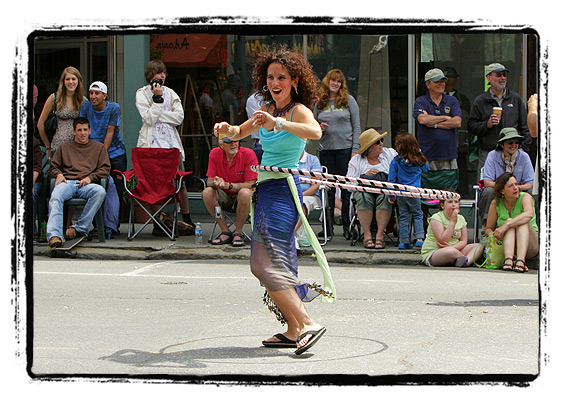 A group of hula-hoopers made their way by us. One kid was really young. None of the pictures of him came out, so I used this one instead. There’s just something neat about people who can hula hoop with ease. The little kid was amazing. 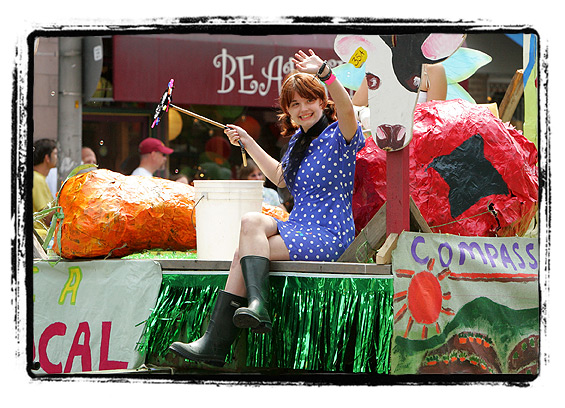 I honestly don’t think she was wearing a costume. That’s just how they dress up there. 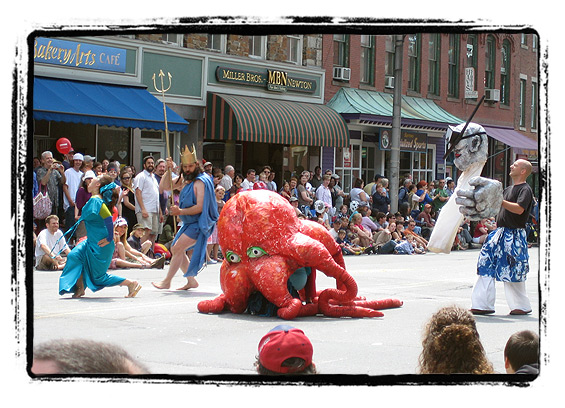 What is happening here? I mean, seriously…

I like to think, with the octopus and all, that Vermont was just celebrating the Detroit Red Wings Stanley Cup season a few days late. (You’d have to be a hockey fan to pick up that reference).

I dunno — just some more weird Vermont culture I guess. You have to admit, that is a pretty neat octopus though. Not sure what it has to do with cows, but still, it was an exciting finish to the parade.