CLOSE
Home Finance Lack of Momentum to Get Over the Hump 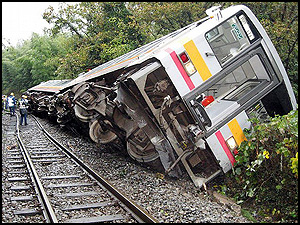 I’m in one of those zones of funk where clearing my debts is within sight, but for some reason, after month after month of progress, it suddenly doesn’t feel like I’m getting any closer.

But, hey, I know what the problem is. That’s a start, right?

The additional money I’ve thrown towards the mortgage while trying to get the PMI eliminated has most definitely derailed my plans. Without a doubt. I know that.

So far, I’ve paid down my mortgage an additional $3k more than I thought I had to. And half of that was put on a credit card. That type of maneuver will derail any payment plan…

It was back on October 31, 2007 that I kicked off my first and only debt snowball plan. Through the Happy Rock, I stumbled upon a great debt repayment calculator and it got me excited to make an attempt at a more structured plan than what I’d done in the past.

Looking at my “schedule“, my last non-mortgage debt was to be paid off in October of this year. Having the numbers right there in front of me made it look so easy.

While I didn’t exactly stick to this payment plan all the way through, I was often times over a month ahead of myself. That felt great. My debts were falling by over $2000 per month. Then I hit the wall.

The good news is that it still appears that I’m ahead of schedule. Basically, without asking you to actually look at the chart, I’m supposed to have a balance of $3535 right now. My actual balance on those accounts is $2547. Just the auto loan.

Of course, that’s pretending that the new credit card balance doesn’t exist… which means that I’m actually $500 behind.

I dropped the baton.

My train has derailed.

Use whichever disaster analogy you are most comfortable with.

Poor Spending Habits of the Less Fortunate Perplex Me