CLOSE
Home Rants Photo of the Week: Even the Gorilla was Unimpressed 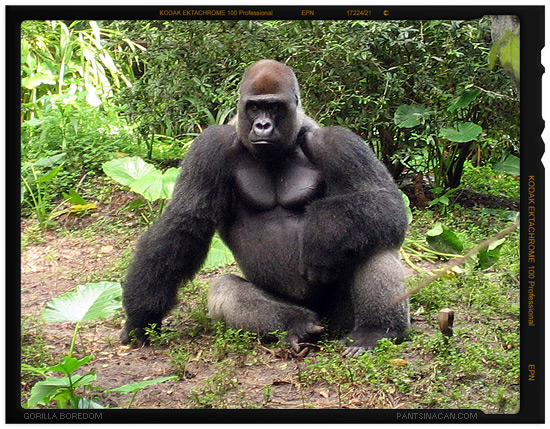 Last Friday, while in Florida, I visited Disney’s Animal Kingdom. You know, the fourth big attraction on the Disney property after the Magic Kingdom, Epcot Center, and MGM Studios.

And for that kind of money, I expect some top notch entertainment.

I didn’t find it.

In fact, the “adventure” was soured even before we entered the park…

See, the person we purchased the admission from was very pushy with the up-sell.

“Well, a ‘Park Hopper’ pass will allow you to go to a different park within the Disney resort.”

“Yes, I’m aware of that. I just want two adult tickets for Animal Kingdom, thanks.”

“Are you sure you don’t want a multi-day pass? They’re valid indefinitely and,” blah, blah, blah…

She went on and on and on — holding on to my credit card and passes so I couldn’t just walk away from the pitch.

Odd that she worded it that way — her name tag said she was from Syosset, New York. I’ve never in my life heard a Long Islander use the term “y’all”.

Then, as if Connecticut was local (a mere 1200 miles away), she suggested a year-long pass…

I’ve always found it funny that their tickets are valid for so long, but they’re still just a flimsy piece of cardboard. I actually have 1 day remaining on one of those “passes” from 1997, but the cardboard has all but disintegrated in my wallet since then…

Even up here, a season pass for Six Flags comes on a laminated plastic credit card type of thing — they even put your picture on it. At Disney, it’s cardboard. Go figure.

Anyway, the experience of purchasing tickets was invasive and uncomfortable. She was just prying for an opening to toss another sales pitch my way. What, am I buying a car here? Certainly not very Disney-esque…

Then, as I’m sure many of you know, you get your finger scanned as you enter the park — otherwise the turnstile won’t turn. What is up with that?

Every time I go to Disney, about once every 5 years, I conveniently forget about that, as I’m sure most other visitors do too.

But I’m sorry, they’ve got my credit card number, my address, my signature, and my finger print.

That’s the exact same amount of information I provided to get my green card.

It’s a freakin’ theme park?! Disney has more of my information than the Department of Homeland Security.

What does Disney need all that for? Imagine what they use it for?

Considering how many people claim to be worried about identity theft or big brother watching over you, well, I’m surprised so many people continue to visit the Disney parks.

The TSA doesn’t even take a finger print at the airport?!

Anyway, once inside the park, it screams Disney. Other than the overpriced knick-knacks, that’s a good thing.

Great landscaping, it’s nice and clean, and it looks and feels like you’re guaranteed to have a wonderfully memorable day.

Then you notice that there aren’t any animals. Anywhere.

This is “Animal Kingdom”, right?

I see a big concrete tree. Oh, and a fake concrete mountain off in the distance too…

Oh! There’s the ever elusive Mallard duck. Finally, some wildlife!

But we have those in Connecticut. You don’t even have to pay to see them.

So we immediately head over to the safari ride. Rafiki’s Rover or some such silly name.

They have this thing now where you can get a “Fast Pass” by swiping your ticket in a machine. It’ll spit out a time later in the day when you can come back. The idea is that you won’t have to spend the day standing in line.

So I walk up to a vacant machine and stick my ticket in. It spits it back out.

I tried my wife’s ticket. The machine spits it out too.

Seeing that I’m having trouble, and I’m not alone, a Disney employee tries again for me — like maybe I’m a moron and I’m putting the ticket in upside down or something.

Same problem for her. This is what she says:

“Yeah, did you have this in your wallet? Sometimes that can mess up the mag-strip so the machines can’t read them…”

Where was I supposed to put my cardboard tickets that are apparently valid until the end of time? The woman I purchased it from made it out as if it was one of the most valuable things on earth — I put it in my wallet for safekeeping.

What if I had run through the mist machines a few times on the way here? Or gone on the water ride? I’m pretty certain the ticket wouldn’t have survived anywhere but in my wallet. I couldn’t believe it.

And by the looks of those around me, most people were keeping their tickets in their purse or wallet. Um, Disney? You might want to make a design change…

After three or four tries on each ticket/card, it eventually worked. We were to come back in about 3 hours. Fair enough.

We walked around some more and eventually stumbled across a few tigers (sleeping, of course) and the obviously bored gorilla pictured above.

Okay, those are two pretty impressive animals to have in the collection, but you can see those at nearly every metropolitan zoo in the country — usually for admission of around $20 (or FREE in Chicago!).

For more than three times that amount, I want to see something, well, let’s just say that if I’d gotten to see a polar bear fight a gorilla, I’d say that I got my money’s worth.

Needless to say, that didn’t happen.

They didn’t even have a polar bear.

Somehow three hours pass — mostly just walking around nicely landscaped swamplands looking at birds just like the birds that lined the highway on the way there. Seriously, those stork looking things look pretty much the same when you speed by them at 70 mph.

We head back to the Safari ride and, well, stand in line.

Seems everyone uses the fast pass so the line at 3 o’clock is the exact same line that would have been there at noon. I’m not sure the whole idea is working as planned.

So we drive out into the “wilderness” (I use the term loosely) with an over enthusiastic Disney employee having a pretend conversation with a recording blabbing about poachers in the area or something.

I’m not knocking it, I mean, I realize they’re trying to add a little excitement to a rather boring truck ride, but sometimes I wish they’d tone down the Disney-ness of things.

Or the showcasing of the “upside down” tree that apparently took 2000 years to grow — again, obviously made of concrete and fiberglass.

And how about those phony termite hills?

On the ride, we saw some alligators (also available on the side of the highway in much of Florida), some giant horned gazelle things, a giraffe, a couple of different kinds of rhinos, and some elephants.

No doubt, some pretty decent stuff. But we waited three hours for that?

At a traditional zoo, again, with an admission 3-times less, we could have seen all of those things in the first hour?!

In the end, I felt ripped off.

Disney’s Animal Kingdom in Orlando can’t compare to any of the zoo’s I’ve been to in the past few years.

The only thing Animal Kingdom had was more employees and a HUGE fake tree. Oh, and a pushy sales pitch.