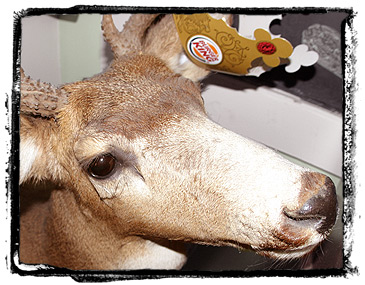 While handing out Halloween candy on Friday night, and dreading the reaction of some of the children at the sight of our entry room, we received some conflicting reports…

In years past, when it wasn’t a disaster zone — just an ugly room, we’d gotten comments like, “I like your reindeer” in reaction to the deer head we once had mounted on the wall or “Oooooh! I LOVE Harry Potter” in reaction to a bus shelter poster we once had up. The older kids would usually be very interested in the stand-up arcade game.

Now that we’ve torn the room apart, the “reindeer” is in the attic — partly because it’s kinda creepy and partly because I’d consider myself to be anti-hunting, and all too often people would ask if it was “my” kill.

I’ll keep his head in my attic, but I won’t shoot him.

The Harry Potter poster has been moved upstairs to our “computer” room where I’m typing this right now. It’s just a really nice poster — not nearly as tacky as it might sound.

And the arcade game, well, it’s still down there as Heather noticed, but for Halloween this year, I left it unplugged and I hid it behind a photo backdrop in an attempt not to draw *any* attention to my house.

So, pretty early on in the evening, a little girl at the door blurted out, “This is a really cool house!”

Well, that was unexpected. Maybe this was the same little girl that thought we had Rudolph mounted to the wall a few years ago and never forgot.

Or, perhaps, she was just being polite, like so many of the kids were.

A little off topic, but the lack of parity is disturbing. Most kids at least say “Thank You!”, but many of them, dare I even say MOST, went so far as to say “Happy Halloween” or “Have a great night!” too as they ran off with handfuls of candy.

When I was still trick or treating, I don’t ever remember saying much more than “Trick or Treat!” followed by a quick “Thank You!”. Seems the kids are getting more and more polite.

And then some high schooler comes to the door, not in costume, and doesn’t even say “Trick or Treat”… Yeah, reality comes crashing back…

So, anyway, back to the little girl that thought we had a cool house… I’m not sure where that came from, or if that was her own personal version of “Have a great night!”, but it left me really confused.

What was she looking at?

Are kids impressed by vinyl siding? I should hope not…

Then, another kid, a boy this time who I think lives next door (he was in costume, so I can’t be certain), rang the doorbell. As soon as my wife opened the door and even before he said “Trick or Treat!”, he said, “Woah, did a bomb go off in here or something?”

Yep. That’s the reaction I was dreading…

But who could blame him?