MoneyMateKate mentioned this a few weeks ago on her site and I kinda selfishly thought to myself, “Wow, sucks to be her…”

But now, after the letter I received yesterday from Citibank, well, sucks to be me too.

Here’s the body of the letter: 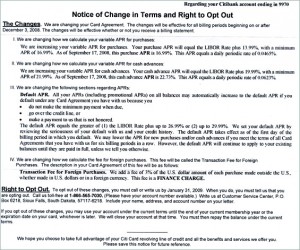 I know, it’s tough to read but the main line reads:

That’s news to me.

In fact, logging in to my Citi account, it clearly states that my purchase APR is 9.960%.

Nice of them to mail it so late that I received it in December, huh?

Wait, they mentioned something about December 3rd too…

Let me read it again…

It really sucks to be me.

Honestly though, I’m not too worried about this because I don’t use the card for anything other than gas these days (so it’s easy to pay in full each month), but at the same time, I’m a little offended that they’d jack my rate so high for no apparent reason.

I know it’s their right, but still…

And sure, it may be because they’ve never made much money off of me. I mean, this is one of the accounts I opened to finance the siding project. I put a quick six or seven grand on it, at zero percent, and then put it away until the balance was paid.

Or maybe it’s across the board, you know, in an attempt to keep the company afloat. That’s probably more likely…

But for those that do carry a balance from month to month, this is like a death sentence.

If your in that situation and you get hit with this letter, I strongly suggest that you respond to the letter opting out and declining the change in terms. Sure, they’ll close your account, but I’m sorry, better credit card offers are still out there and you should look for them.

No, “afraid” isn’t the right word… Have I mentioned before that I’m not a fan of their online interface? If not, I just did.

(Actually, I mentioned it here back on July 24)

Looks like I’ll be swinging back to my Bank of America cards to pay for gas again.

You know, just in case I don’t pay in full one month…

Anyone else get this letter?

Get Rid of Credit Card Debt