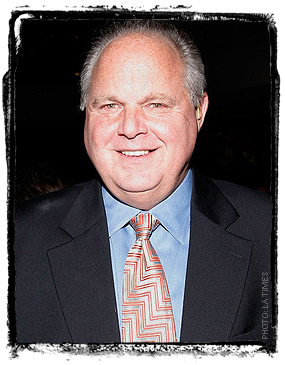 At lunch I was listening to a fat, pig-headed, drug abusing, egotistical, mostly deaf jerk-wad (aka Rush Limbaugh) and he very accurately described what a certain part of this new “Stimulus Law” will actually do.

His words, “We are bailing out losers”

He was talking about what a lot of people were talking about today, you know, the part where 10-million homeowners on the road to foreclosure will get to stay in their homes…

That sounds all peachy but the real problem is that it’s pretty likely that 9.9 million of those folks never should have been in those homes in the first place?!

Now, of course, at this point, Rush went on to blame Jimmy Carter, Bill Clinton, Barney Frank, and Barack Obama for everything simply because they’re Democrats… Yawn.

But he re-gathered himself and went on to say that there are millions more people, way more than the 10 million headed for foreclosure, who have been paying their mortgage on time all along even though they’re “upside down” and for their efforts, they’re getting nothing.

Personally, I’m not upside down and I know I shouldn’t be bothered by what other people get or don’t get but this one really rubs me the wrong way.

Most of these folks cheated and lied their way in and they’re getting rewarded for it.

(Don’t tell me that their “victims” of predatory lending… That’s BS.)

I just wish I could reset my mindset around 18-months back, you know, to when things seemed fair.

Things are certainly not fair now.

Really, agree with his politics or not, Rush’s transcript from this afternoon’s show is worth the read (or listen!).

CNBC’s Michelle Caruso-Cabrera also had an interesting take on the whole situation that’s definitely worth a read too: A Break For Those Who Least Deserve It

She says most of what I’m thinking but more eloquently.