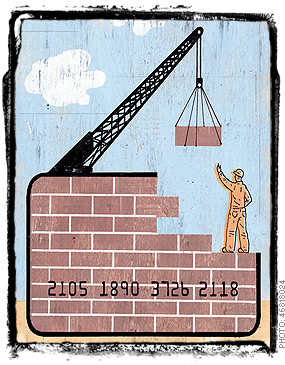 So let’s see how much all of the recent well documented credit troubles — limits, rates, and closed accounts — have affected my own credit.

Right now, I only know for a fact that my credit limit was cut in half on that one Bank of America account last month.

I called it a financial assault.

It hasn’t resulted in any financial hardship but it did bruise my ego some.

I’ll get over it.

Anyhow, the last time I did this was in December (when I asked if I was in for a rude awakening as the crumbling economy had been nothing but good for my credit card accounts), so here is how things stand now:

CitiBank AT&T Universal MasterCard
I opened this account in April of 2007 utilizing a 0% for 12 months offer. I wrote a $6000 check to myself, which I originally dropped into my ING Direct savings account to jump on the “arbitrage” bandwagon. Shortly afterwards, I pulled the money out to finance the siding project. Now paid off, this is the only card I carry in my wallet for things like gas.
Current Balance: $0
Credit Limit: $9500 (No Change)
Rate: 16.990% (up from 9.960%)

Chase Bank Visa Card
This was one of my first credit cards. I opened the account in 1998 and it was one of the cards that I ran up a considerable balance on before I got my act together. The highest it ever went was $12905 and that was in October of 2005. By August of 2006, I’d eliminated the balance, but continued to use the card for gas and the occasional purchase. Balance was always paid in full each month. In June of 2007, I took advantage of a 4.99% for the life of the balance offer to fund the siding project. I don’t carry this card.
Current Balance: $0
Credit Limit: $19200 (No Change)
Rate: 13.24% (Down from 13.99%)

Bank of America NHL MasterCard
Another of my original credit cards originally opened through MBNA in 1997 for a free t-shirt. This is also another card that I ran up a 5-figure balance on. In May of 2004, it topped out at $10915. By November of 2005, I had wiped the balance out. Now I have my internet service provider automatically bill to this card each month, and like clockwork, I pay back the $42.95 automatically on the same day using an autopay set up from the MBNA days. I do not carry this card and have not carried a balance since November of 2005.
Current Balance: $0
Credit Limit: $14000 (Down from $27400)
Rate: 15.99% (Down from 17.74%)

LendingTree Bank of America GoldOption Loan
This was a loan for $10000 I took out in December of 2002 to, again, consolidate a few balances and put some much needed cash in my hands. At the time, it was LendingTree.com that found me the loan at 9.9%, and when the big check made out to me came in the mail, it was from MBNA. After a couple years of paying it down in regular $226 intervals, MBNA sent me a credit card attached to the account and started treating it like a credit card. With each month, the rate would rise another half percent or so. Not cool. I made my final payment in March of 2005 when the rate had climbed to 13.24%. I do not carry this card.
Balance: $0
Credit Limit: $13700 (No Change)
Rate: 12.99% (No Change)

Hmmm… Seems that that one Bank of America account was the only one that was targeted. Yeah, it was my card with the highest limit, but I’d have thought that they would have slashed (or even closed) that Signature Visa Card account that I haven’t even received a statement for in nearly 30 months.

Last “purchase” I made on it was in March of 2006 — that’s over 3 years with zero activity. If there’s an account of mine that should be in their sights, it’s that one.

Taking the whole thing in, BoA slashed my limits a ton, Citi jacked my rates a ton, and Chase just delivered good news.

Hmmmm, I wonder which card I’ll start carrying next month…

For comparison sake, here’s a recap of how things have panned out in previous roll calls:

I’d be lying if I said that I wasn’t a little dismayed about falling out of the six-figure club.