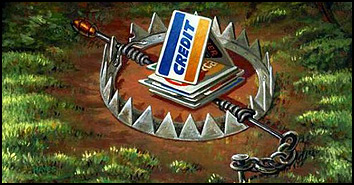 Late last week, I mentioned that I was back in the red…and that I was going to get going on doing something about it.

I dug into the PIAC archives to dig up the progress chart that I used the last time I was in debt and quickly realized that it kinda sucked.

Sure, it got the job done but this time I think I’m going to take a different approach.

Back then, it was more of a schedule than anything else where I had it all planned out from day one right to the last penny owed.

This time, I’m going to make it more of a journal rather than a schedule. I plan on trying to pay back $2900 per month towards debt.

Lofty goal — and one that I’m not certain I can consistantly make — but if I do manage, well, I’ll be debt free again by the end of the year.

Here’s the chart (which you may want to enlarge):

The Capital One account, which is actually my wife’s, is the 0% offer that we used to partially finance the renovation. The offer expires in April and we’re a bit behind in our original plan to pay it off before paying any finance charges.

The Chase account is another 0% percent offer that I took advantage of just last month. That offer expires in October of 2011.

The last account is my Bank of America Business account. This is the card that I use to make all of my business related purchases — and will continue to use. Once I get it back down to a zero balance, I shouldn’t have any trouble keeping it there on a month-to-month basis.

For the time being, I’m not pre-populating finance charges (they’ll be entered manually along the way) and I’m not even attempting to calculate minimum payments ahead of time either. In the end, they’re pocket change when compared to everything else…

If all goes as I hope, I’ll be debt free in October. I don’t expect it to work out quite that well but that’s why I’ve given myself a two-month cushion.

Now, eager to get started, I’ve just gotta wait until I get paid later this week to start seeing a dent in the numbers…

Debt Repayment: After Two Years, I’m Back at It