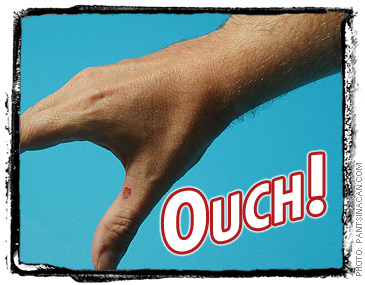 Okay, so this morning, since it’s finally warm outside in New England, I went outside to do a little lawn work and within 5 minutes or so, it became apparent that I’m still not ready for lawn work just yet.

The answer is yes, it hurts.

I just can’t believe that it took less than 5 minutes to tear a hole in myself…so I guess it’s good that my primary job is behind a computer screen.

I’ve had far worse but this one is in just the WRONG place. I’m telling you, it’s worse than it looks.

Anyway, I thought I’d expand a bit on Friday’s post about Smurfling 2.

Well, it wasn’t that long ago that I mentioned that we were partial to “weird (by North American standards) Dutch or Scandanavian names” and Henrik certainly fits that criteria. 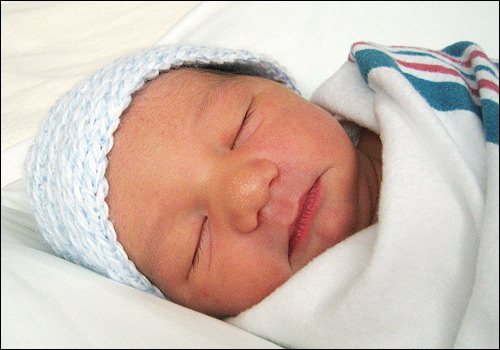 Since “announcing” the birth, we’ve heard all kinds of comments regarding the name…

Most are convinced that he’s named after a hockey player since I’m Canadian and that automatically makes us fans of the sport — Sedin, Zetterberg, or Lundqvist.

Maybe, but not really. None of those guys are Canadian or play for our favorite team.

Or maybe since I’m a nerd, it’s paying homage to Niels Bohr? His middle name was Henrik.

Amazingly, I knew that his middle name was Henrik but I’m not enough of a nerd to name my children after turn of the century physicists.

We’ve even been told that Henrik is the name of one of the major characters in the “The Girl with the Dragon Tattoo“.

Thankfully he’s a good guy, apparently. Not surprisingly, though, I’d never even heard of the book (or movie) until after the fact. Even still, I’ll likely never read it.

Or… since we’ve got a super German last name, we wanted to go all Nazi and name him after SS leader Heinrich Himmler.

Um, no. That would be insane — though it certainly led us to steer clear of that spelling and pretty much every single other German first name.

In reality, though, I think it was more of a Henry Ford type of thing that my wife and I agreed on — but all of those baby name books out there right now list Henry as one of the “uber-popular” names for the next few years.

With that in mind, and the memory of having 12 Jennifers in my class during the third grade (one even permanently switched to her middle name of Neel for 4th grade), I wanted to avoid a similar situation.

Unable to think of something better than Henry (which we still agreed on), we went Scandinavian on it — some folks still look at us like we made it up.

Then again, those are the same folks that thought the name Duncan was spelled wrong too.

Break from the Routine