When I woke up this morning, I told myself that this was NOT going to be another wasted weekend. I was all geared up and ready to go outside and rake, rake, rake, until both hands were covered with blisters.

Then I noticed that it was raining. Ever tried to rake leaves in the rain?

Yeah, it doesn’t work at all.

So my next target became *that* room.

Yes, that one. The room I’m ashamed of: 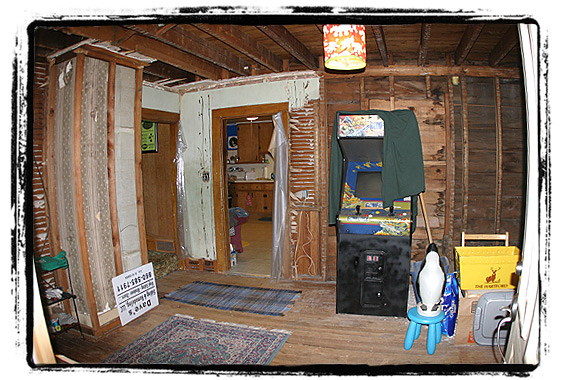 Off to the right hand side, behind the yellow bin and the plastic penguin, there was a big pile of crumbled plaster on the floor. You can’t see it, but trust me, it was there.

I cordoned off the room using the shower curtains, which you can see, put on my 49-cent dust mask, you know, for protection, and brought in a snow shovel from the garage and a shovelin’ I went.

I filled the air with the finest dust you’ll ever see (or breath) while also filling 8 trash compactor bags full of crumbled plaster and broken pieces of the wooden lathe that once held the plaster up.

I know that doesn’t sound like much, and it’s really not, but plaster is freakin’ heavy.

Each one of those bags, which I only fill half way due to the weight, weighs well over 60 pounds.

Backbreaking work, really, which is probably why we never “finished” the job when we tore the walls down in the first place.

Once I’d cleared the room, I broke out the shop vac to get all of the fine dust (that had settled) up and out. Yep, I even vacuumed — that’s worth über bonus points with the wife!

It was at this point, she mentioned that we should get a new rug for the room. Not really wanting to throw money at the room, as a temporary fix and all, I was hesitant, but she twisted my arm and off we went to a super discount store that if I were still in high school, well, I’d never admit to having been inside. Ever.

This place makes Walmart look like Neiman Marcus — you know, the store where Sarah Palin shops…

But it’s always had some decent, not great, but decent area rugs. And today, it didn’t disappoint!

We walked out of there with a modern looking patterned 8′ x 11′ rug for $125. We could’ve gone the oriental route, but I’ve never really liked how “busy” they look.

Once home, we unrolled the rug. It’s not exactly what either of us had in mind, I’m sure, but it’s a definite improvement. From there, I decided to “hide” the largest windowless wall with the photo backdrop that I used on Halloween night.

Then we moved an extra couch into the room. (Who has an “extra” couch? Seriously…)

And, finally, I plugged in the arcade game for a quick game.

Here’s how it looks now: 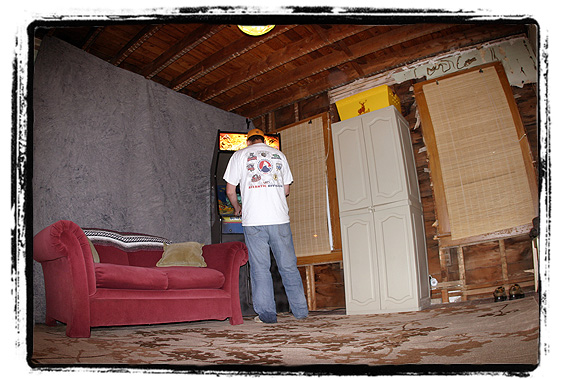 Not great, I know, but still, it’s an improvement.

And to think, it only cost us $125 to take it to that unfinished-but-sorta-finished basement look!

And can I just mention that I suddenly find myself getting some decent use out of January 2007’s dumbest purchase? How about that!

Oh, one more thing, why does the carpet smell like Elmer’s glue? That’s gonna fade, right?