CLOSE
Home Finance Yearly Expenses – A Comparison to the Past… 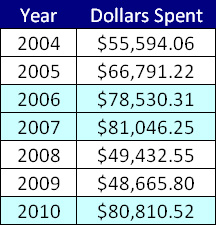 At the start of each year, I usually do a big comparison to years past to see if I’m progressing or regressing.

This afternoon, I totalled up the numbers from from Spending Reports in 2010 and then went back to my trusty Microsoft Money file (still running strong 16 months after they announced it’s no long supported) to get the numbers from prior years.

The numbers are on the right.

And strictly based on the number on the chart, well, it’s really apparent that I’ve regressed and gone back to my old ways…

In 2006, we had the roof of our house re-done. Then in 2007, we had new siding put on the house. Both were headache-inducing projects that I’ve tried to put out of mind.

Most recently, in 2010, we carried out the over-chronicled interior renovation.

Major updates, for sure, that skew the numbers significantly.

Sure, I spent $80k last year. It’s true. But if you take the renovation expenses out of the equation, I actually did alright. Not as great as 2009, no, but still decent.

But while I can pat myself on the back for a job well done, it’s not really reasonable to do so.

Sure, classifying the renovations as “one-time” expenses and omitting them from the numbers might look good but it isn’t realistic.

Keeping them in *is* as realistic as it gets — I’ve got at least 3 more 5-figure renovations tentatively planned for the next decade.

We need a new kitchen.

We still need to modernize the second floor to match the first.

And you didn’t think I’d forgotton about that garage plan, did you?

Oh no — I haven’t forgotton about it. If anything, I’ve expanded on it since I first mentioned it. We’ll definitely need a four car garage now!

Anyway, planned renovations aside (none planned for this year), so far in 2011, I’m on the right track.

I’ve Made $20k Less this Year but I Feel Great!