I’ve heard the rumblings for years now that Microsoft would be giving the axe to their entry into the personal finance software realm but now it’s apparently on it’s deathbed.

I’ve been receiving this “nag” screen periodically for the past few days anytime I use the program: 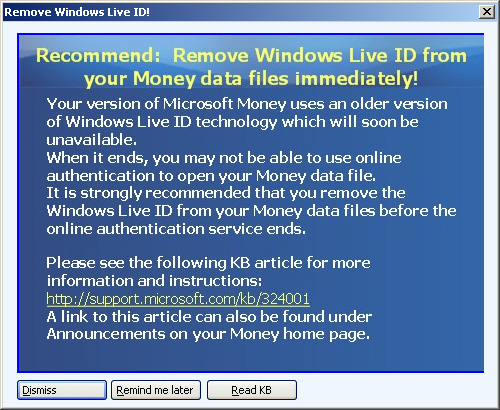 I first purchased Microsoft Money back in 1997 — according to my entry in, yes, Microsfot Money, I paid $52.95 for it in March of 1997 at the now shuttered Circuit City.

Thinking back, and looking at the entries around it, I’m truly surprised that I dropped that kind of coin on something that wasn’t a video game (Diablo, anyone?) or something relating to ice hockey.

In reality, it was probably one of my wisest purchases ever…

Yep, I was able to accurately watch my credit card debt swell to over $30k.

Some people claim not to have a clue how deep in debt they are but because of Microsoft Money, I *always* knew where I stood financially. Not that I did anything about it for years but that’s a different conversation…

So, anyway, my first version of Money was Money ’97. It was pretty solid — as a 21 year old, I liked it enough to actually sit down each week and enter every single transaction. That’s saying something.

Eventually I upgraded to the 2002 version. It seemed a little buggy but it certainly looked a lot nicer. Perhaps buggy isn’t the right term — I don’t wanna get all those Mac-holes worked up. I found the “wizards” and “auto-budget” features annoying.

I hoped that the issue would correct itself when I upgraded to the 2005 version. It wasn’t perfect but that’s the version I still use today. Shortly after I got married, I hooked my wife up with the 2007 version.

What I’m trying to get at is that we’re a Microsoft Money family and have been for over a decade. And now they’re leaving us out in the cold…

The logical transition would be to migrate towards Quicken. I’m not happy about it but I’m not against it either — my concern is that importing my thousands and thousands of entries from MS Money (a defeated competitor) will be, well, hit-or-miss.

Why don’t you just keep using your version of Money, Brainy?

That’s a great question. I wish I could!

I don’t use that.

Yeah, I do the online banking thing, but I don’t let the bank update my records. I can take care of that manually (offline), thankyouverymuch.

I went through all of the actions that the Microsoft Support page instructed me to and, well, since I was never using the service, it didn’t have any effect — so here I am stuck with a “nag” screen and a slight worry that someday the software will just flat out tell me, “Sorry, you can’t open this anymore…”

It makes me sad.

So, I ask, has anyone made the switch from MS Money to Quicken (or anything else) without too much of a problem importing data?

The Departure of Steve & Barry’s — My Bargain Basement