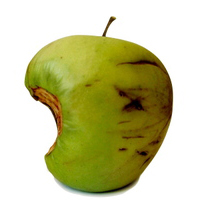 So, I’ve been meaning to write an answer to the as-of-yet unasked question, “How’s the stock market experiment going for ya?”

Apple has been the anchor in my portfolio — down over 30%.

For every dollar I made from my donut-related investments, I’ve lost two more dollars because of Apple.

Even the ongoing Lululemon transparent pants debacle (which sounds more like a value added feature, if you ask me) hasn’t hurt my bottom line significantly…

Photo of the Week: Ten-Dollar America