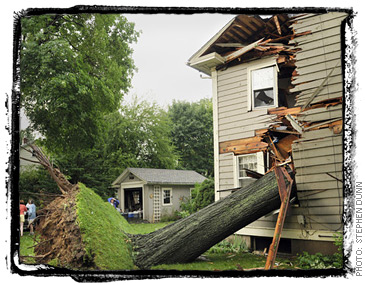 Last month I hinted at another home improvement project that we’ve had on the radar for completion this summer besides having the oil tank in the scary basement drained and removed.

We still haven’t had that done and haven’t even called anyone about it yet.

Instead, we’re leapfrogging it.

Our second “project” for this summer, now the first, was/is to have some trees in the yard taken down.

This has been something I’ve been meaning to have done pretty much since day one but it seemed so silly to have work done on the trees when the actual house is what needed the most work.

One tree, in particular, has always kind of frightened me.

It is by far the tallest tree in the neighborhood. It’s trunk is an amazing 104 inches around — trees that wide aren’t real common in New England.

It’s also far enough away from house that, should it decide to tip over, it would have enough momentum to slice the house right in half. Yep, just like that picture (which was taken last week less than 10 miles from my house).

Should it fall in a different direction, say good bye to my garage and the BMW and Cessna parked inside.

In another direction? Well, the trunk is still thick enough a few hundred feet up to slice a neighbor’s house in half too. While that could be a good thing, I’m not certain that my homeowners insurance would cover it…

Making things even more frightening is that it’s a white pine. The needles don’t fall off in the winter so the the entire tree is like a sailboat’s sail in the wind. Also being a white pine, it’s a soft wood.

The pine cones are annoying too.