So remember how when I bought the Land Rover a few months ago, I said that I was well aware that they have a reputation that comes along with them.

Always in the shop.

Well, since purchasing it, I had that serpentine belt and thermostat problem that set me back $1200.

Then there was that fender bender (not really the car’s fault) that cost me another $1200 out of pocket.

And have I mentioned that the “Check Engine Soon” light has been on for a couple of months?

If not, well, a couple of weeks ago I took it in to the nearest Land Rover dealership for an oil change.

Actually, I really only took it to the dealership so as to get it looked over prior to our 2000 mile road trip.

Off hand, I also asked them to take a look at the check engine light issue even though the car was driving just fine.

I dropped it off on Wednesday, July 27th, expecting to pick it up on Thursday evening — one day later.

No call came while I was at work on Thursday — so I called them and they said that I needed a new oxygen sensor to make the light turn off and that they wouldn’t have the part until tomorrow.

Inconvenient, sure, but we’ve got four cars. We’ll live.

Friday comes and, again, no call.

Now they say they need to replace another oxygen sensor and they’ll have it ready for me on Monday.

Hmmmm… I’m not liking how this is going…

I agree to it, disparagingly, while thinking in my head — they’re just throwing new parts at the problem that probably isn’t even a problem at all.

On Monday evening, my wife drives me out there to pick it up and it’s still up on the lift.

They never called. What’s up with that?

Don’t they realize the crazy daycare preparations we had to make (not to mention, we both had to leave work early) to make this trip? Grrrr…

On Tuesday, I call them again asking if it’s ready. This time they say some sort of gasket needs to be replaced cause it’s all gummed up with oil or something is leaking — I dunno, I stopped listening — but I agreed to have them replace it because he claimed that the car wasn’t running well.

Weird, my car ran fine when I took it in for an oil change and now it doesn’t run well.

I’m really not liking how this is going.

On Wednesday, an entire week after I’d originally dropped it off, the dealership FINALLY calls me to tell me that the engine light is still on and that I need a new “engine harness” to correct the problem.

I let him do his gear-head schtick for awhile before asking how much that would cost to replace.

“Well, they’re made to order so we wouldn’t be able to do it for two or three weeks but the cost with labor would be around $2400.”

Staying calm (and thinking about my looming vacation in a matter of days), I asked, “What’s my bill up to so far?”

So I get a ride out there and the whole time I’m thinking — did they really just try to hit me up for over $4000 on an oil change? For real? Is this really happening?

So I get to the dealership just as they’re about to close, charge my $1675 fee, flash a few dirty looks and get in the car.

Did I just go without a car for an entire week for a simple oil change?

When I get home, I hop out, and click the key to lock the car.

I try it again.

They broke the keyless entry.

So, on Friday, August 5th, just before we embarked on our vacation, my wife took it back to the dealership to get the keyless entry fixed.

After being treated like a moron at first by being told her key’s battery was dead (and mine just happened to die at the exact same time? Suuuuuure.), and some denial that they did anything that would affect the keyless entry, they tried to “reset” things — for two hours while my wife sat there.

And they were unsuccessful. 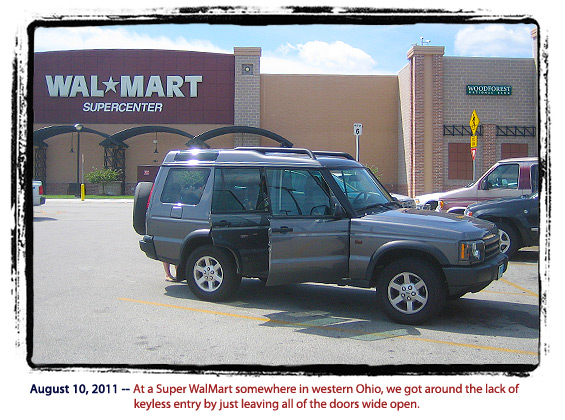 So, I don’t blame Land Rover — I still don’t think it’s a lemon and I don’t think that their cars suck.

I do, however, think that Land Rover of Farmington Valley is a complete joke. We will NEVER again take the car there.

And while the lack of keyless entry is a real pain (you try carring two kids and having to walk to the driver’s side door to unlock the car when it’s pouring rain), it’s not the end of the world.

But on the bright side, 1800 miles into our road trip when, for no reason at all, the check engine light turned off, I smiled a little on the inside.

Speaking of that Youth/Senior Wealth Gap…